Former CEO Shaheen Air, Director HR Shaheen Air Imran Aziz informed airline’s employees that the airline had been shut down officially due to unavailability of funds. The airline will soon declare itself bankrupt.

Ehsan Sehbai and his brother apologized to the entire staff that they could not pay the staff salaries for the last 8 months.

He advised the employees of the Shaheen Air to consider the airline officially closed and all employees are free to find jobs in the market.

It employed about 4,000 people directly and 1,000 indirectly, creating a wave of unemployment in the Pakistani aviation industry.

As of October 2018, all of Shaheen’s routes are suspended. 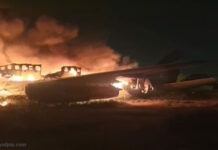