More than double the number of passengers compared to August 2020, but still a 45.3% drop from the pre-crisis level of August 2019

The Flughafen Wien Group recorded the highest passenger volume in August 2021 since the outbreak of the coronavirus pandemic. The total number of passengers handled by the Flughafen Wien Group (Vienna Airport, Malta Airport and Kosice Airport) in August 2021 showed a substantial decline of 45.3% compared to the pre-crisis level of August 2019. However, the total of 2,223,735 passengers is more than double the figure for August 2020.

Traffic results compared to the pre-crisis level of August 2019: the number of local passengers fell by 44.5%, whereas transfer passenger traffic decreased by 40.7%. The number of flight movements in August 2021 was down by 38.2%, and cargo volume at Vienna Airport declined by 12.0% from the pre-crisis level. Nevertheless, the figures for August 2021 show a considerable improvement compared to August 2020 (refer to the table below).

Malta Airport reported a reduction in passenger volume of 50.5% in the month of August 2021 from the pre-crisis level of August 2019, whereas Kosice Airport registered a decline of 59.1%. 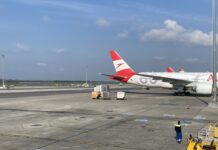 A holding company wants to take over half of the shares of Vienna Airport, whose Board opposes the move