easyJet, Eurowings and Volotea join the files already opened by the General Directorate of Consumption against Ryanair and Vueling – The proposed fines exceed 20,000 euros for each company, considering that their faults are serious.

The airlines easyJet, Eurowings and Volotea have joined Ryanair and Vueling after being filed by the Balearic Government due to offences that are classified as serious, and each of them has received a proposal for a fine of more than 20,000 euros. The reason lies in the consideration by the General Directorate of Consumption that these companies are applying abusive clauses, by limiting the hand luggage that their passengers can take in the cabin or demanding the payment of higher rates to be able to carry them with them. The head of the aforementioned regional department, Félix Alonso, points out that these files are the result of the complaint initially filed by the Facua consumer association against Ryanair, and that gave way to a campaign to track the websites of airlines to detect cases Similar.

The General Director of Consumption defends the implementation of these controls and the proposals for sanctions for serious misconduct, recalling the dependence that the citizens of the Balearic Islands have on air transport due to their insularity, which is why he insists that these companies must be especially scrupulous in compliance with regulations. In this sense, he recalls that the legislation allows passengers to carry their hand luggage in the cabin, without being forced to pay additional amounts for it.

Given that in the case of airlines there are thousands of consumers in the archipelago who are affected by this type of behaviour, added to their repetition, which implies that the infraction supposes a high economic benefit for these companies, these acts as serious misconduct. In this way, the penalty proposed for easyJet and Eurowings amounts to 21,500 euros in each case, and the one set for Volotea rises to 24,000 euros. This last amount is the one that was also established in the files previously opened by Consumption to Vueling and Ryanair.

As noted, it is common for these companies to set limitations on the entry of these packages with the passenger depending on whether a basic rate or a higher rate is paid, when Spanish legislation determines that it cannot be prohibited as long as the maximum size of the carry-on baggage is not exceeded.

It must be remembered that this is not the only reason why the Balearic Department of Consumption has opened a file against different airlines. A few months ago he did the same against those who did not incorporate a free telephone number for customer service within the required period, also the result of complaints filed by Facua.

No option to claim

Proof of this is that together with the file with a proposal for a penalty of 24,000 euros that in recent days Consumer has opened against Vueling for abusive clauses in relation to luggage, now it has added another against this same company for two other offences, one typified as minor and another as serious, in which a fine of 28,500 euros is contemplated, which would be added to the previous one.

This new file was born due to the complaint of a consumer, who was denied boarding for not having the registration certificate, and who, when trying to claim through the website of this company, found that it was not possible.

Once this website was reviewed by the aforementioned service dependent on the Government, it was found that there was no option to collect complaints, as required by current legislation, but also the necessary information did not appear so that customers know that in case of disagreement with the airline, they have the right to external mediation, something that is also mandatory.

It must be remembered that Vueling was also one of the airlines on which a file was opened for not offering a free telephone within the required period, as indicated above. 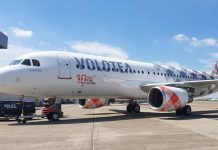