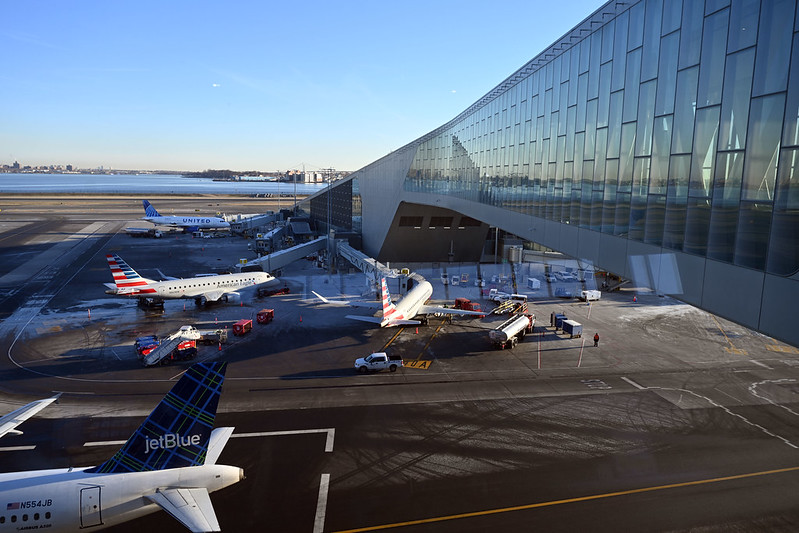 Governor Kathy Hochul, Port Authority of New York and New Jersey Executive Director Rick Cotton, and Chairman Kevin O’Toole, and LaGuardia Gateway Partners CEO Frank Scremin today celebrated the completion of new facilities at LaGuardia Airport’s Terminal B, marking a major milestone in the terminal’s $4 billion transformation. The completion and the opening of LaGuardia Terminal B’s western skybridge, and the opening in December of Terminal B’s second concourse, means that every arriving and departing passenger at Terminal B will experience newly built, 21st-century architecture and facilities from gate to curb. All of the terminal’s temporary walkways will now be taken out of service by Saturday, Jan. 29. With the completion of the second pedestrian bridge, which will span an active aircraft taxiway, Terminal B also becomes the world’s first airport with dual pedestrian skybridges.

“The transformation of LaGuardia airport into a world-class destination that is internationally recognized for its beauty is an integral part of our bold vision for a new era in New York,” Governor Hochul said. “The completion of this $4 billion project will help provide a brand new passenger experience for everyone travelling through Terminal B, easing connections and creating lasting impressions. Congratulations to all who made today’s milestone possible as we continue creating a whole new LaGuardia airport worthy of New York. ”

Terminal B was awarded UNESCO’s Prix Versailles in December as “Best New Airport in the World” by a blue-ribbon panel of international architects assembled by the United Nations agency. The new terminal includes 1.35 million square feet of new terminal facilities and features 35 gates, a 3,000-car parking garage, and new covered, convenient pickup facilities for both taxis and ride-sharing vehicles. The terminal offers best-in-class retail, vast dining experiences, stunning art and amenities that provide customers with a world-class 21st-century travel experience. Related roadway improvements and supporting infrastructure were all built while keeping the terminal fully functional during construction. With the interior work at Terminal B now completed, the remaining small portion of the old Central Terminal Building has been removed from service and will be torn down, with demolition expected to be completed by spring 2022.

Port Authority Executive Director Rick Cotton said, “Today’s announcement marks the completion of new passenger facilities at LaGuardia Airport’s Terminal B, which was recently named Best New Airport in the World by UNESCO’S prestigious 2021 Prix Versailles. From a passenger point of view, the old LaGuardia is no more. We have gone from worst to best, something no one thought was possible when this project began. Terminal B creates a top-of-the-line passenger experience and does so in the context of world-class architecture, inspiring public art and notable, iconic, locally inspired concessions.”

Port Authority Chairman Kevin O’Toole said, “The Port Authority remains committed to improving its customer experience across the region, and here at LaGuardia Airport we are seeing a major component of the redevelopment nearly complete. The design of Terminal B, in collaboration with key stakeholders, creates a bright, welcoming environment for travellers, airline and airport employees. The entire LaGuardia team worked tirelessly toward building a world-class facility at Terminal B and we couldn’t be prouder.”

New York City Mayor Eric Adams said, “It’s time to get New York City moving again, and a world-class airport here in Queens will help us do that. This is a whole new LaGuardia, and I want to thank Governor Hochul, the Port Authority, and all of our partners who helped make this happen. This is how we ‘Get Stuff Done’ together.”

City Council Speaker Adrienne Adams said, “Terminal B’s completed redevelopment marks a major milestone in LaGuardia Airport’s transformation into a world-class facility that all New Yorkers and visitors alike can be proud of. As one of New York’s most important gateways, LaGuardia Airport is being reimagined as a beautiful, modern, and welcoming airport, and today’s announcement is a breakthrough towards completion. I thank Governor Hochul, the Port Authority of New York and New Jersey, and LaGuardia Gateway Partners for their commitment to rebuilding our critical transportation infrastructure.”

New York City Council Member Francisco Moya said, “The New York experience starts the moment travellers arrive and that means ensuring we are welcoming them with facilities and services reflective of today. LaGuardia Airport’s Terminal B transformation complements our efforts to incentivize New York City’s tourism, which is key to our local economy and our recovery from COVID-19.”

Queens Borough President Donovan Richards Jr. said, “Today we celebrate a major milestone in the redevelopment of LaGuardia Airport, which is a gateway to our region and a linchpin of our borough’s economy. This vital redevelopment project is giving the families of Queens and all of New York City the world-class airport they deserve. Thank you so much to Governor Hochul, the Port Authority, LaGuardia Gateway Partners, and all those who have helped make this happen.”

President of the Building and Construction Trades council of Greater NY Gary LaBarbera said, “This milestone marks another important step towards reimagining the future of LaGuardia Airport as a world-class transportation hub that New York can be proud to call its own. We applaud Governor Hochul for her exceptional and effective leadership in moving this critical and transformative project forward, while creating thousands of middle-class careers with benefits for the hardworking men and women turning this vision into a reality. Members of the Building and Construction Trades Council are committed to ensuring LGA’s Terminal B becomes a cornerstone of New York’s transportation infrastructure for years to come.”

CEO of LaGuardia Gateway Partners Frank Scremin said, “LaGuardia’s new Terminal B is a crowning achievement for the people of New York, for the future of aviation, and for what a public-private partnership can accomplish. There were a lot of naysayers, but from the onset of this project, we said that we would bring our city a world class airport. Today, with the leadership of the Governor’s office and the Port Authority, our equity, management and construction partners, a record number of minority and women-owned businesses, and the unwavering support of New Yorkers, we made it happen. The new Terminal B is a shining example of a 21st Century airport facility focused on passenger experience and what can be accomplished when we all work together.”

As one of Terminal B’s most distinct architectural elements, the pair of skybridges span active aircraft taxi lanes, connecting the new, light-filled arrivals and departures hall to the terminal’s two island concourses, all featuring best-in-class concessions and amenities for passengers.

The construction of both skybridges has enabled more than two additional miles of taxiway space to be built, reducing delays for arrivals and departures and will help ease customers’ ability to travel seamlessly to their gates. Planes have been taxiing under the eastern skybridge since the spring of 2021 and will be able to successfully taxi below the western skybridge beginning in summer 2022. Passengers using the new skybridges to reach Terminal B’s gates will enjoy magnificent views of the Manhattan skyline.

Measuring 482 feet long and 60 feet above the ground, the two pedestrian bridges were a critical feature in the design of the new terminal. The dual bridges are impressive architecturally, but also assure that aircraft that are taxiing have two ways to enter or exit their gates.

Since 2020 customers have been using one of the completed skybridges to access Terminal B’s east gates. The design of the new terminals’ twin island concourses provides more space and options for planes to taxi upon departure and arrival. Previously, aircraft movements could be blocked because there was only one way into the gates and one way out.

About the LaGuardia Redevelopment Project

In 2015, a comprehensive plan to construct a whole new LaGuardia Airport was unveiled with the goal of creating a world-class, 21st century passenger experience featuring modern customer amenities, state-of-the-art architecture, more spacious gate areas and a unified terminal system. The $8 billion project, two-thirds of which is funded through private financing and existing passenger fees, broke ground in 2016.

In February 2018, the new Terminal B parking garage opened with over 3,000 spaces and a dedicated level for Uber, Lyft and other for-hire car services. In December 2018, the first of 18 new gates and the first new concourse in Terminal B opened. In October 2019, Delta Air Lines opened its first new concourse and seven new gates. In June 2020, the soaring new arrivals and departures Hall at Terminal B opened its doors.

In August 2020, a second new concourse at Terminal B opened its first gates, followed by the opening of additional gates in December 2021. Delta’s new arrivals and departures hall at Terminal C is scheduled to open in spring 2022. LaGuardia Airport’s Terminal B recently received the UNESCO’s 2021 Prix Versailles, the global architecture and design award, for best new airport in the world. This significant award fulfils the agency’s promise to transform what was once regarded as the nation’s worst airport, into a world-class facility ranking among the best in the nation.