After a record-breaking 2015 – when Manchester Airport set a new all-time high of 23,116,554 passengers for the calendar year – 2016 is set to be a year of celebrations as several airlines mark their long-standing associations with the UK’s Global Gateway for the North.

Nine of the world’s top 20 biggest airlines will celebrate milestones in the next twelve months – whilst the airport’s cargo terminal, the World Freight Terminal, will also celebrate 30 years since it opened in 1986.

Air France will mark 70 years of flying from Manchester in June. The French flag carrier commenced services in 1946 and today operates 40 flights a week between Manchester and Paris Charles De Gaulle airport.

Lufthansa will celebrate 60 years of flights between Manchester and Germany – and now operates 48 flights per week to Frankfurt and Munich.

Scandinavian Airlines or SAS, which is the flag carrier of Sweden, Norway and Denmark, and the largest airline in Scandinavia, will mark its Golden Anniversary. It now flies 74 flights per week connecting Manchester to destinations across Scandinavia.

Singapore Airlines, the world’s most awarded airline marks 30 years of flights from the North of England and currently flies daily to its hub at Changi Airport via Munich offering connections across South East Asia and Australasia. Starting services in April 1986, Singapore Airlines are Manchester’s longest serving, international, long haul airline.

Another airline that will mark its 30th anniversary is American Airlines, which now flies daily long haul flights to Philadelphia, New York and Chicago in the USA.

Celebrating 25 years of flights across the Atlantic is Delta Air Lines. The airline now offers a daily service to New York. Whilst it’s partner airline, Virgin Atlantic will mark 20 years and currently flies to destinations across North America and the Caribbean including Orlando, Atlanta, Las Vegas and Barbados.

Icelandair, the main airline of Iceland, celebrates a decade of direct flights to capital city, Reykjavík.

And Etihad Airways also marks ten years at Manchester and the North of England, now operating 14 services per week to Abu Dhabi in the United Arab Emirates.

Stephen Turner, Manchester Airport’s Commercial Director, said: “On behalf of Manchester Airport, passengers and colleagues past and present, I offer both my thanks and congratulations to the airlines celebrating a significant milestone this year.

“Last year was a record-breaking year for Manchester Airport and these long standing anniversaries are testament to the on-going commitment of our airline partners to serving the demand that exists in the North of England.

“It is with their support and commitment that will enable Manchester Airport to continue to be a major economic driver in the region, providing jobs for thousands of people and enabling businesses to trade globally; driving the Northern Powerhouse and allowing our towns, cities and visitor attractions to continue to enjoy the benefits of international tourism.” 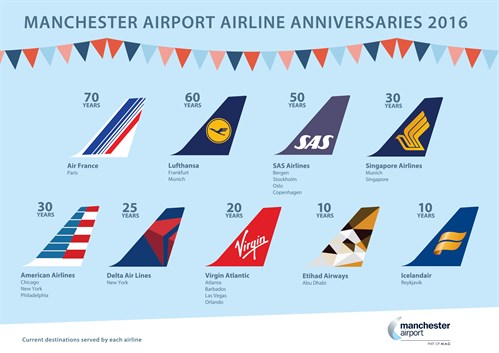 “Having started with a single service in 1946, Air France currently offers over 40 weekly flights and 7 daily flights to Paris for its passengers. The route provides an efficient point to point service to Paris as well as easy connections via its Paris CDG hub to its extensive worldwide network of over 150 destinations.

“Serving the Manchester community maintains Air France’s strong competitive position in the UK. Thanks to our services, local businesses can trade globally but it also helps the North West region with incoming tourism. Air France looks forward to celebrating more anniversaries in Manchester and its wider region in the future.”

“Back when Cliff Richard and the Young Ones were top of the charts, we began services flying B747 Combi aircraft. Today, we still connect customers to destinations across SE Asia and Australasia and have just upgraded our fleet serving Manchester. Our daily services, via Munich, are now operated by the latest 4-cabin Boeing 777-300ER aircraft, including new seating throughout the aircraft, as well as our brand new Premium Economy cabin.

“We would like to thank all our customers for their support over the last 30 years and look forward to many more milestones still to come.”

David Thomas, Director Sales UK & Ireland at American Airlines said: “Manchester is an important, longstanding international market for American, and we are proud to be celebrating 30 years of service from the North West this year.

“We offer customers up to three daily flights to Philadelphia, New York and Chicago and a wealth of onward connections. For US customers, our Manchester flights provide easy and direct access to the North of England. Serving Manchester, along with our joint business partner British Airways, is crucial to maintaining our strong competitive position in the UK.”

Peter Baumgartner, Chief Commercial Officer of Etihad Airways, said: “We are delighted to celebrate ten years of the hugely successful service between Manchester and our global hub in Abu Dhabi, which launched in March 2006.

“We operate a double-daily service to Manchester, connecting guests to more than 100 destinations across our extensive network. This has enabled us to support existing and new trade opportunities for businesses based in the North West across our growing global network.

“We chose Manchester Airport as the site of our first European contact centre, which opened in 2012 and now employs 250 people. We have also made a significant investment in the city with our long-term sponsorship of Manchester City Football Club and we invested in airport infrastructure to deliver a superior experience with the operation of a dedicated lounge in Terminal One for our premium-class guests.”

Peter Baumgartner added: “Etihad Airways looks forward to celebrating many more milestones in the city and wider region through the dedication and hard work of our talented people.”

Manchester Airport officially opened on 25 June 1938 and is now the gateway for the North of the UK and the largest airport outside London with over 210 destinations served by 70 airlines.

Brussels Airlines will resume flights to/from the UK from Wednesday