This afternoon, an accident happened on Liège Airport’s main runway, a Beech B200 Super King Air training aircraft (registered OO-LET) of the ASL training academy wasn’t able to lower its landing gear and made a rather hard landing on the runway.

“More fear than harm for the instructor pilot and his pupil, but the damage to the runway still has to be determined,” the airport wrote on social media.

Rescue services rushed to the aircraft to foam around the aircraft to prevent follow-up accidents. A small fuel leak was noticed. The airport authorities were forced to close the runway. The airport, however, remains open and aircraft can take off on the contingency runway.

Long-haul traffic will have to wait while the airport authorities and the Belgian civil aviation authorities are assessing the damage and working to evacuate the aircraft from the runway.

Restrictions in Amsterdam: TUI fly Netherlands moves part of its flights to Rotterdam, but also to Liège 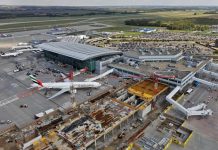