The report reveals the devastating impact of the COVID-19 pandemic on Europe’s airports, with passenger traffic decreasing by -64.2% during the first half of the year – and almost coming to complete standstill in the second quarter, with a drop of -96.4% compared to the same period in 2019.

Over the first half of the year, the decrease in passenger traffic was slightly less pronounced in the non-EU market (-59.8%) than in the EU (-65.6%). This mostly reflected less stringent lockdowns in several non-EU countries and domestic air services being less affected than international ones.

While passenger volumes on international routes decreased at a similar pace at non-EU and EU airports (respectively -65.1% and -65.4%), the decrease on domestic routes was less acute at non-EU airports (-50.7%) than at EU ones (-62.9%). That was the case in particular for airports in Russia, Norway and to a lesser extent Turkey.

All this resulted in significant changes in the ranking of the Majors1 (top 5 European airports).

Disruptions in rankings were not limited to the top 5 but widespread in the airport league – also reflecting the lack of alignment between European States in lifting travel restrictions. For example:

Europe’s airports also experienced a -16% fall in freight traffic during the first half of the year, with the decline reaching -23.1% in the second quarter.

The Top 10 European airports for freight traffic registered a decline of -13.7%, with only Luxembourg (+4.0%) posting an increase.

Following the tentative coordination of the lifting of travel restrictions at EU level as of mid-June, the traffic recovery has been slower than expected. As a result, passenger traffic across the European airport network still declined by -78% in July compared to the same month last year. This translated into an additional 208 million passengers lost, bringing the total passenger loss since the start of the year at 969 million.

Over the past 2 weeks, the pace of the recovery has further slowed down. This is due to several States re-imposing travel restrictions, in particular the abrupt decision of the UK to require travellers from Spain to quarantine. 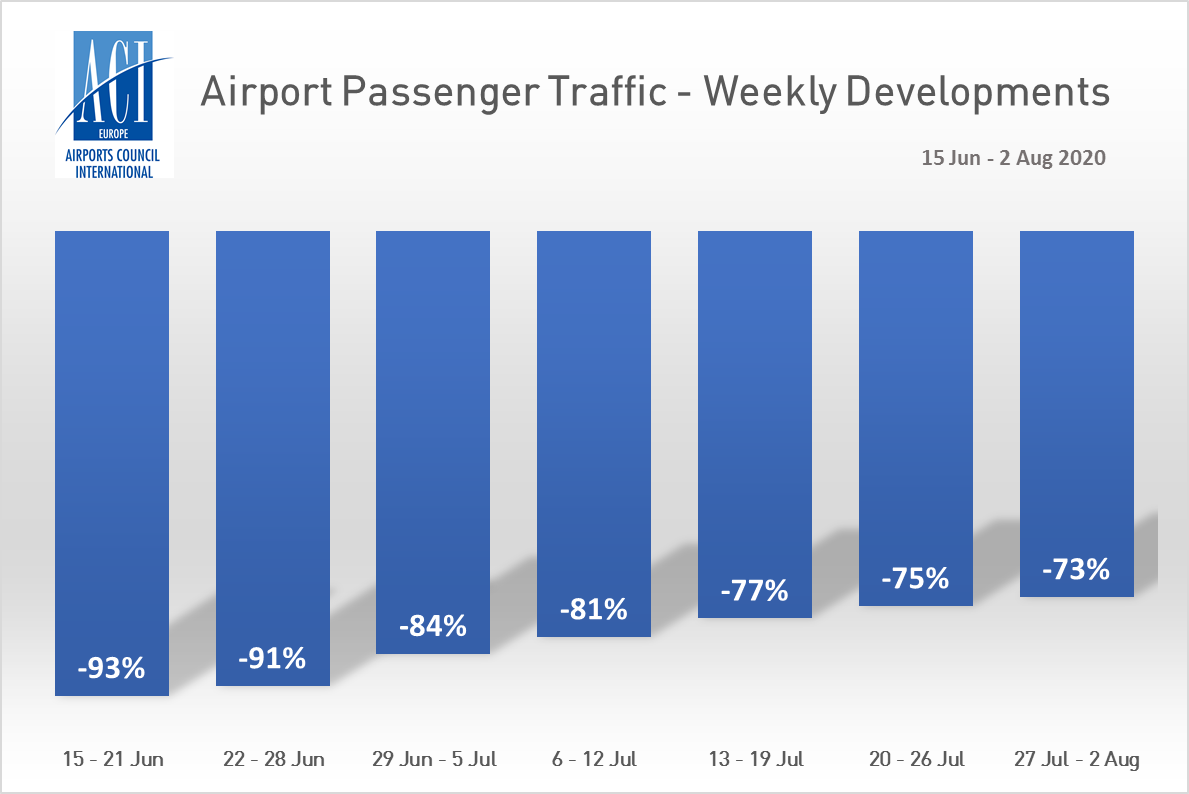 Olivier Jankovec, Director General of ACI EUROPE commented: “The recovery is far too slow-paced and uncertain. Despite desperate efforts to trim down their costs Europe’s airports are burning cash at the height of the Summer. Revenues are weak because of the combination of low volumes with rebates and incentives to airlines to attract and incentivise air traffic. Considering the seasonality of demand, this does not bode well for the coming months. If the recovery does not accelerate significantly, many airports will simply run out of money.”

The airports that reported the lowest decreases in passenger traffic are as follows:

2 The airport size groups are based on total passenger numbers for the full year 2019.