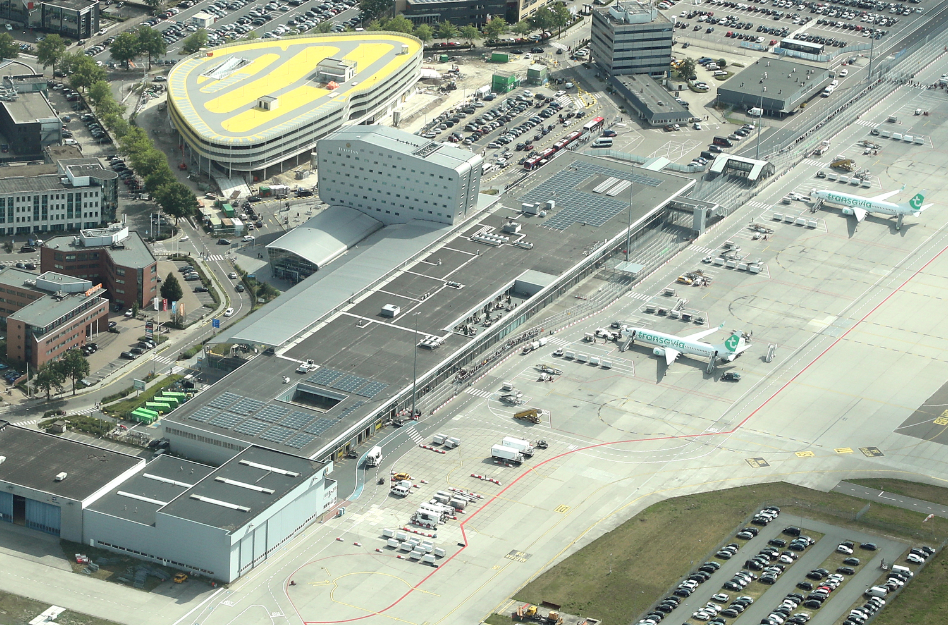 P1, the rebuilt, multifunctional multi-storey car park of Eindhoven Airport, will be handed over on 1 October of this year. This marks the first step in the metamorphosis of the Eindhoven Airport terminal forecourt into a pleasant area where greenery, art, technology and design are prominent.

P1 is located directly opposite the terminal. The building with its modern design combines several different functions. In addition to 780 parking spaces (including a Kiss & Ride zone) and various electric vehicle charging points, the building also houses a spaciously designed, roofed public transport terminal, bicycle parking for 110 bikes, and a McDonald’s restaurant and McDrive.

Roel Hellemons, CEO of Eindhoven Airport, says: “We are proud that we will be able to start using P1 soon. The joint efforts of the many people involved have enabled us to completely rebuild this complex, taking into account the lessons learned from the various investigations into the partial collapse.”

For Eindhoven Airport, the commissioning of P1 is an important step in the quality impulse that is being given to the airport area. Upgrading this area matches Eindhoven Airport’s strategy of transitioning from quantity to quality. Eindhoven Airport is moving forward as part of the Brainport region – investing in quality in various areas is the key starting point.

People who want to park their car in P1 can book a slot in advance if they prefer. These slots can now be booked via www.eindhovenairport.nl for people arriving on or after October 7.

The new complex was designed by De Bever Architecten from Eindhoven. The architect opted for an undulating design to match the shapes of the terminal building and the Tulip Inn hotel. The design integrates seamlessly with the available space and the multi-functional use of the building.

The P1 building was built by BAM Bouw & Techniek in Eindhoven, in compliance with sustainable building principles, and has a certified BREEAM rating of ‘very good’. BREEAM assesses buildings against nine sustainability categories. The lighting design scheme for the complex was developed by lighting architect Har Hollands, from Eindhoven. Other examples of designs by him in the local area are the lighting design scheme of the viaduct over the motorway at the High Tech Campus and the red chimney in the re-developed Strijp S area.

The forecourt immediately adjoining the terminal will be given a facelift as soon as P1 has been put into use. This area will be redeveloped and converted into an area for public use and can even serve as an events venue. The forecourt will also offer space to some ‘local gems’, showcasing typical areas of activity of the Brainport region in the airport grounds.

In addition to the upgrade of the forecourt, the connection with the terminal is being greatly improved. For example, a spaciously designed Airport Boulevard will be constructed from multi-storey car park P4 to the terminal. The lighting scheme of the forecourt and boulevard will also be designed by lighting architect Hollands. Both areas will feature light posts with programmable coloured LEDs. They can be programmed to reflect specific themes and/or current events. Hollands: “This lighting design scheme is our way of emphasizing Eindhoven’s reputation as the city of light. What is particularly important is that the lighting – consisting of moving lines – is much more than a merely functional design. It should evoke emotion, tell a story, and provide an experience.”

Greenery is another important aspect of the redevelopment of the area. Several trees will be planted, some of which will be illuminated, and MTD Landschapsarchitecten from ‘s Hertogenbosch have been given the responsibility for landscaping the area. The forecourt and the Airport Boulevard are planned to be completed in April 2020.