On 6 December, Cork couple Ken Wills and Deborah Kirby took their love to new heights at Cork Airport with a touching engagement in the arrivals hall.

Cork Airport was enlisted to help Ken with his declaration of love as he arrived into Cork from London Heathrow on an Aer Lingus flight. While Deborah waited unawares in the arrivals hall, her favourite song Woman by John Lennon was being played by The Loungeman. It was then that Ken dropped to one knee and popped the question.

The moment of the proposal between the Ballincollig couple was captured by Cork-based media production company, Isla Media.

Cork Airport’s Managing Director Niall MacCarthy said: “When Ken reached out and asked for assistance to plan the perfect proposal, we were delighted to help. It was the perfect ruse. We recruited a camera crew, who pretended to film the live Christmas music being performed at the airport daily throughout December and arranged for The Loungeman to play Deborah’s favourite song. It was lovely to help this great couple capture this beautiful moment.

“After the proposal, airport staff, Aer Lingus crew and the couple toasted with a glass of champagne. We offer Deborah and Ken a heartfelt congratulations from everyone at Cork Airport.”

Ken revealed he thought Cork Airport would be the perfect proposal location as airports have a special place in the couple’s hearts. “We first saw each other, after 15 years, six years ago in an airport. And have been dating since,” he said. Ken added that while he had been thinking about the proposal for some time, he only “plucked up the courage” on Wednesday night to email Cork Airport’s Managing Director Niall MacCarthy and see whether they could work together on a magical Christmas surprise. “I just took a chance,” he said.

The Loungeman, who serenaded the couple on the night, has offered to perform at their wedding for free as a wedding gift. 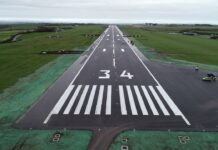 Cork Airport to reopen after 10 weeks of works