Brussels Airport handled 21.8 million passengers in 2016, down 7 % on record year 2015. The decrease is completely due to the attacks on the airport on 22 March; the airport was closed for 12 days and then only gradually resumed its operations. Cargo traffic at Brussels Airport rose by 1.1% compared to 2015, despite the impact of the attacks.

In 2015, the number of originating passengers declined by 9% compared to 2015. This is, of course, due to the closure of the airport after the 22 March attacks, but also because of the continuing terror threat in our country and in Europe, which caused a number of passengers to refrain from travelling by air.

As in November, Brussels Airport recorded a strong growth of 8.3% in passenger numbers in December, compared with the same month last year. The remarkably strong growth of 11.7% in the number of originating departing passengers last month shows a gradual regaining of confidence after the lock-down in November/December 2015 and the attacks on 22 March in our country. The strongest growth was recorded by Brussels Airlines, Ryanair and the European scheduled flights.

Cargo transport at Brussels Airport closed 2016 with a growth of 1.1% compared to 2015. Strong figures were noted particularly in the second half of the year, so that the loss caused by the departure of Jet Airways and the impact of the attacks were compensated on a year basis. The transport of pharmaceutical products and perishable goods from and to Brussels Airport rose sharply last year compared to 2015.

Cargo carried on board passenger flights (belly cargo) fell by 12.6% in 2016. The decrease is a result of the departure of Jet Airways at the end of March and the attacks on 22 March. For twelve days there were no passenger flights at the airport so no cargo could be placed on these aircraft. Passenger flights gradually resumed to reach 100% in June.

Cargo transport at Brussels Airport recorded positive growth of 22.0% in December in comparison with same month in the previous year. This can be almost entirely attributed to the almost doubling of the full-freighter transport (+88.9%). Belly cargo fell by 5.5% compared to December 2015, while integrator traffic rose by 2.0% on the same month in 2015.

The number of flights in the past year decreased by 6.5%, as direct consequence of the temporary closure of the airport after the attacks of 22 March. The number of passenger flights dropped by 7.5%, while the number of cargo flights rose by 7.6%. Aircraft on average carried 113 passengers. This means that the seat occupancy rate was the same as in 2015 despite the lower load factor in April and May during the restart of the airport.

In December the number of passenger flights grew by 1.4% on the same month in 2015. Taking account of the passenger growth of 8.3%, in the past month each flight had an average of 110 passengers on board, compared to 104 passengers in December 2015. 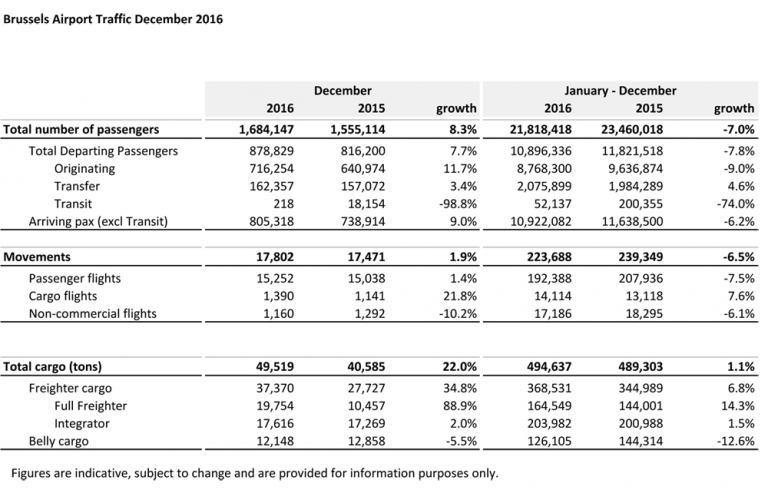