312,556 passengers passed through Brussels Airport in October, barely 13% of the number of passengers in October 2019. This is a further decrease, which is largely due to the growing number of destinations to which travel is strongly discouraged by the authorities. For its part, freight transport continues to grow, with volumes transported increasing by 12% in October.

‘The passenger figures for the last few months are obviously catastrophic,’ explains Arnaud Feist, CEO of Brussels Airport Company. “The current situation is untenable for all players in the aviation sector. Rapid COVID tests are essential to enable the aviation sector to gradually emerge from the current crisis while safeguarding public health and safety. We are working hard on this. And a Europe-wide harmonisation of the testing strategy is essential. The survival of our sector is at stake. »

Passenger traffic: down by 87%

Last month, Brussels Airport welcomed fewer passengers than in previous months due to an increase in the number of destinations to which the government strongly advises against travel, which has also forced airlines to reduce their number of flights or to cancel certain destinations.

The number of transfer passengers was around 17%. Brussels Airlines’ African network plays an important role in this respect.

In October, 45 of the more than 60 passenger airlines were active at Brussels Airport, serving more than 110 destinations and operating more than 1,000 flights per week.

For the fifth consecutive month, air freight saw an increase in volumes transported, i.e. + 17% compared to October 2019. Thanks to this result, Brussels Airport continues to outperform global and European air freight growth. The main cause of global negative growth is still the halt in wide-body passenger flights, which severely limits capacity, freight on board passenger aircraft carrying a significant part of the freight transported worldwide.

Volumes in the full cargo segment more than doubled compared with the same period in 2019 (+114%). The express services also maintained strong growth compared to last year (+19%). This largely compensates for the limited volumes on passenger flights.

On the other hand, freight transported by lorry is down again (-6%), yet the total volume of goods handled by the logistics platform of Brussels Airport has still increased by 12% to reach 61,353 tonnes.

There was an increase especially in imports, but exports also did to a lesser extent. In particular, the flow of goods to and from Asia saw strong growth in October.

The number of cargo flights in October increased by 31% compared to October 2019. This increase was during the day, while the number of night flights did not increase. 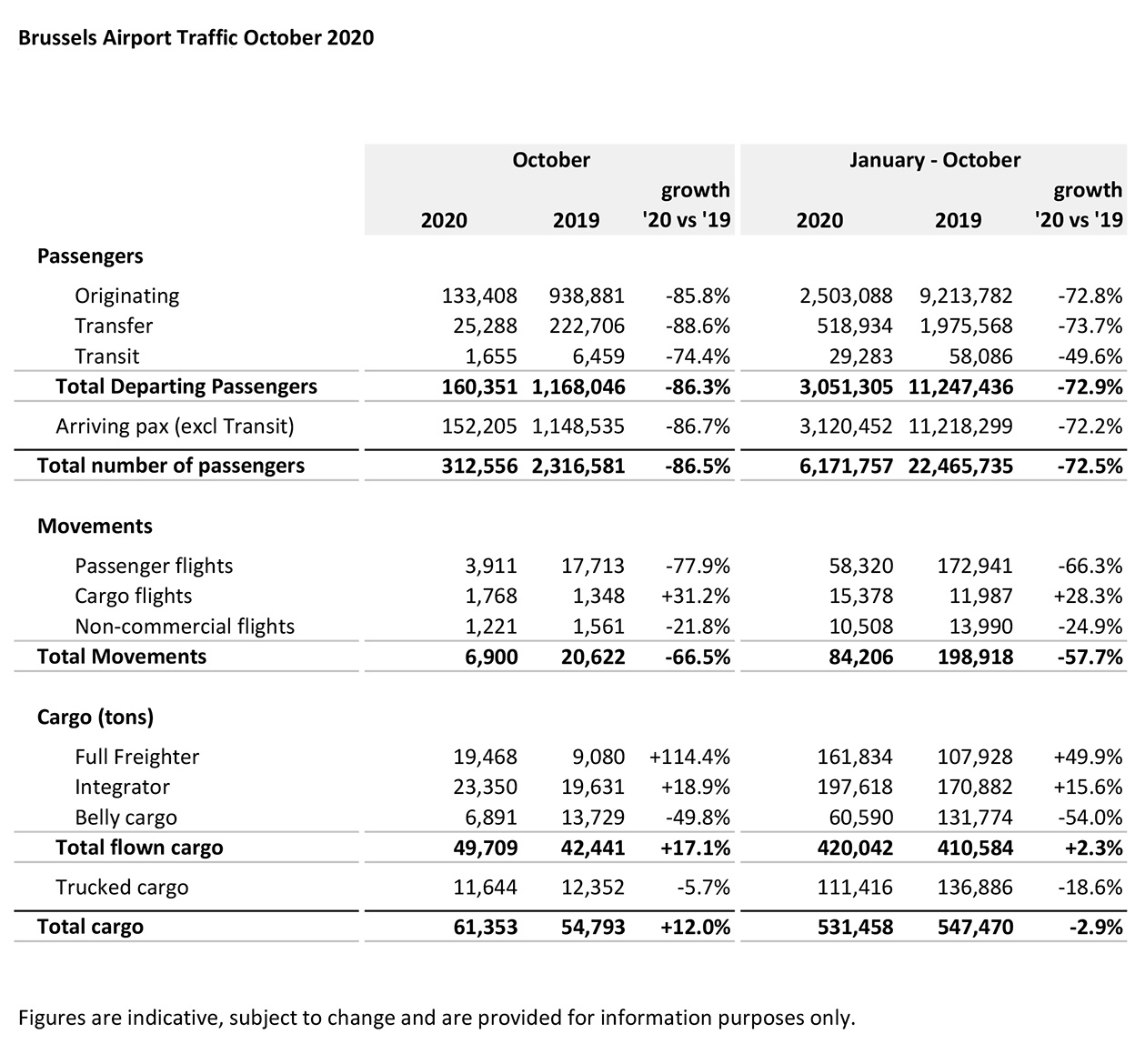