In the past year, Brussels Airport received 24.8 million passengers, an absolute record in the history of the airport. Last year, the records for both day and month were also shattered, both in the month of July. Cargo closes the year with 536,000 tonnes of cargo, the highest cargo volume handled by Brussels Airport in the past decade.

These positive figures are due to the growth in the network of destinations served from Brussels Airport, the use of larger aircraft on various routes, improved passenger load factors and the strong growth of Brussels Airlines.

Last year, the intercontinental network of Brussels Airport was expanded with new routes to Shanghai by Hainan Airlines and to Mumbai by Brussels Airlines, the reopening of the route to Atlanta by Delta Air Lines and the opening of the Brussels-Teheran route by Qeshm Air. Another new airline was Rwandair, with a service to Kigali. In the past year, existing long-haul flights were given additional capacity: e.g. Emirates doubled the frequency of its service to Dubai to 2 flights a day and Thai Airways International upped its service to Bangkok to 5 flights a week.

2017 was also a successful year for the short-haul segment, thanks to the launch of new routes, including Salzburg by Eurowings, Fez by Air Araba Maroc, Constant by Blue Air, Chisinau by Air Moldava and Ankara by Sun Expresss. Brussels Airlines also added new destinations last year, such as Yerevan and Comiso, and recorded accelerated growth by taking over the flights of Thomas Cook Airlines. TUI fly provided additional capacity in 2017 to holiday destinations, both in Europe, such as Araxos, Volos and Braç, and also farther afield with the restart of flights to Tunisia and Luxor.

The month of July was the most successful month for Brussels Airport in its history, with more than 2.5 million passengers in one month’s time. Never before has this figure been exceeded in one single month. July was also responsible for other records for the airport, for in that month the 90,000 passengers-a-day mark was hit for the first time. A new day record was set on 28 July, with 94,305 passengers.

In the month of December 2017, the airport welcomed 1,717,855 travellers and thus achieved the highest number of passengers ever for the last month of the year. This passenger total is 2.0% up on December 2016, despite the many cancellations due to the adverse winter weather in Western Europe. The increase is largely due to the growth of long-haul traffic and the restart of flights to Tunisia and Egypt and the growth of Brussels Airlines.

The full-cargo segment showed a slight increase (+3.0%) thanks to an excellent first quarter and various flights from Schiphol that were transferred to Brussels because Amsterdam Airport had reached its maximum flight limit. Last year, Brussels Airport recorded an increase of 18% in the transportation of pharmaceutical products compared to 2016. This sharp rise confirms the leading position of Brussels Airport as transport specialist for pharmaceutical products; worldwide, the increase was only 2%.

The full-freighter figures in the other three quarters were, however, negative compared to 2016, due to the impact of the stricter Brussels noise restrictions. Cargo companies have left Brussels Airport or reduced their capacity.

In December 2017, Brussels Airport experienced a slight decrease (-2.5%) in cargo compared to December 2016. The full-cargo segment, in particular, declined in the previous month (-21.1%), and this was, as in previous months, a consequence of the stricter Brussels noise restrictions. 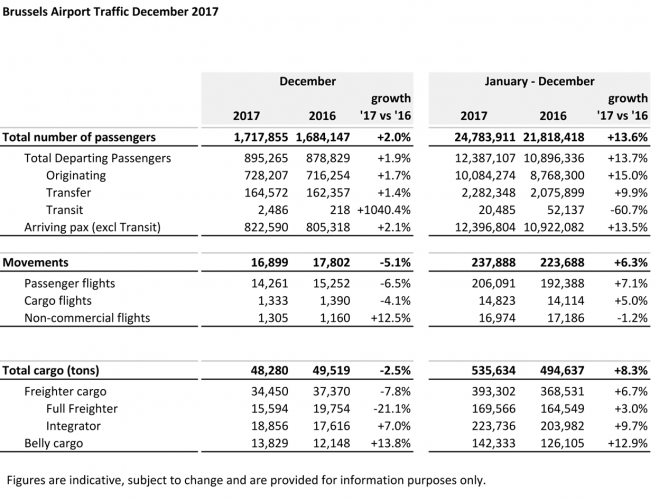