The year 2017 is getting off to a good start with a new record for Brussels Airport. 1,533,489 passengers chose Brussels Airport as their departure or destination airport in January, with a considerable growth during the first half of the month in particular. This 3.5% increase on January 2016 can be explained both by the holiday period that extended into the second week of January and by the ongoing impact of the Brussels lockdown in November 2015, which affected the results until the beginning of 2016.

A 5.4% increase in the number of originating passengers departing from Brussels Airport is recorded compared to January of last year. There was a slight decline in the number of transfer passengers. This is mainly due to the termination of Jet Airways operations in March 2016. The activities of Brussels Airlines and the low-cost carriers are the main drivers of the growth recorded last month.

The progress in full-freighter traffic recorded at Brussels Airport at the end of last year is continuing its momentum in January 2017. Although the Chinese New Year has fallen earlier this year and cargo activity is generally slower during this period, the airport is seeing an exceptional increase of over 21% in freight transport compared to January 2016. Cargo volumes consolidate our results and continue to play an important role in our airport operations.

The integrator segment also recorded a significant volume growth of 7.6% compared to January 2016. Only belly cargo, cargo transported on board passenger aircraft, is declining. This is mainly due to the departure of certain airlines such as Jet Airways in March 2016 and therefore to the decrease in the number of long-haul flights. 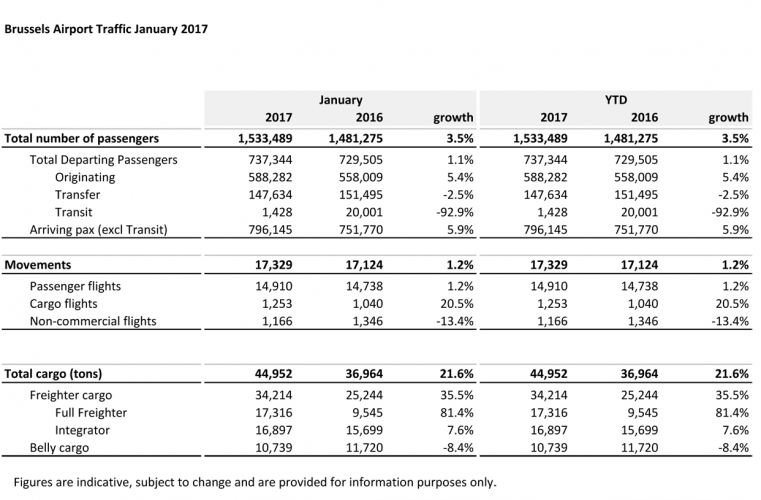