In September, 2,488,142 passengers passed through Brussels Airport, which represents an increase of 1.8% compared to September 2018.

Growth in September was unfortunately less than expected, due, among other factors, to the bankruptcy of tour operator Thomas Cook, which had consequences not only for Brussels Airlines but also for other airlines flying to Tunisia and Turkey. The collapse of Adria Airways, resulting in the discontinuation of flights to and from Ljubljana, and the two-day strike at British Airways also affected passenger numbers in September.

Cargo transport at Brussels Airport fell by 12.3% in September 2019 compared to September 2018. International economic uncertainty continued to negatively impact the European freight market. Unfortunately, Brussels Airport was more affected than other airports, due to the sharp drop in full-freighter transport (down 30.5% compared to September 2018). With a 3.3% decrease, integrator services recorded a less severe decline than in recent months, which were impacted by strikes.

Belly cargo was up slightly, by 1.4%, thanks to the recovery of Brussels Airlines which had a difficult month last year. Belly cargo on board of long-haul passenger flights has performed well overall, despite a general decline in Europe. Lastly, trucked cargo fell sharply by 18.6%.

Both imports and exports have recorded significant decreases. In regional terms, the only growth to be maintained was to and from South America and Africa. 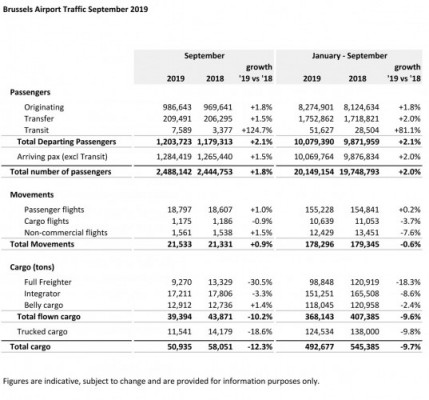