In July, Brussels Airport welcomed more than 2.7 million passengers, representing a 2.7% increase compared to July 2018, and above all making July 2019 the busiest month in Brussels Airport’s history. Freight transport fell sharply by 10.5% compared to the same month last year.

Unfortunately, the first part of the summer was marked by three incidents in the baggage handling system, including an IT problem on 13 July. Brussels Airport and its partners have made every effort to limit the impact on passengers and send the baggage to the passengers concerned as quickly as possible. Brussels Airport would like to reiterate its apologies to the latter for the inconvenience suffered.

The baggage handling system is a very complex system that handles more than 18 million pieces of luggage each year and is constantly monitored and maintained to very high standards. Given this very high level of complexity (the system has more than 6,000 engines), it is unfortunately not possible to achieve a 100% reliability level, but our teams carry out very thorough daily controls to reduce the risk of incidents to a minimum.

The baggage handling system is regularly updated from year to year. In addition, in 2017, a major project (100 million Euros) to develop this system was launched, including the installation of new hold baggage screening machines of the latest generation at the heart of baggage handling and the construction of an additional 10,000 m² to optimise luggage flows. The work will be completed in 2021.

2.25 million bags were processed at Brussels Airport in July, of which unfortunately 10,000 could not be shipped immediately.

In July, Brussels Airport welcomed 2,735,470 passengers, representing a 2.7% increase in traffic compared to July 2018, but also the highest monthly result in the airport’s history. The positive trend observed in June, therefore, continued through July.

Long-haul traffic increased by 4% in July, thanks in particular to the strong growth of Emirates, Ethiopian Airlines and United Airlines.

Freight transport at Brussels Airport fell by 10.5%. This decline can be seen in all segments and is largely due to growing economic insecurity, as confirmed by global statistics published by IATA.

In July 2019, full cargo experienced a sharp drop of 20% compared to July last year, mainly due to the departure of some airlines at the beginning of the year. Integrator services, on the other hand, fell by 4.1%, a slightly smaller decline than in recent months thanks to a reduction in air traffic control disruptions. 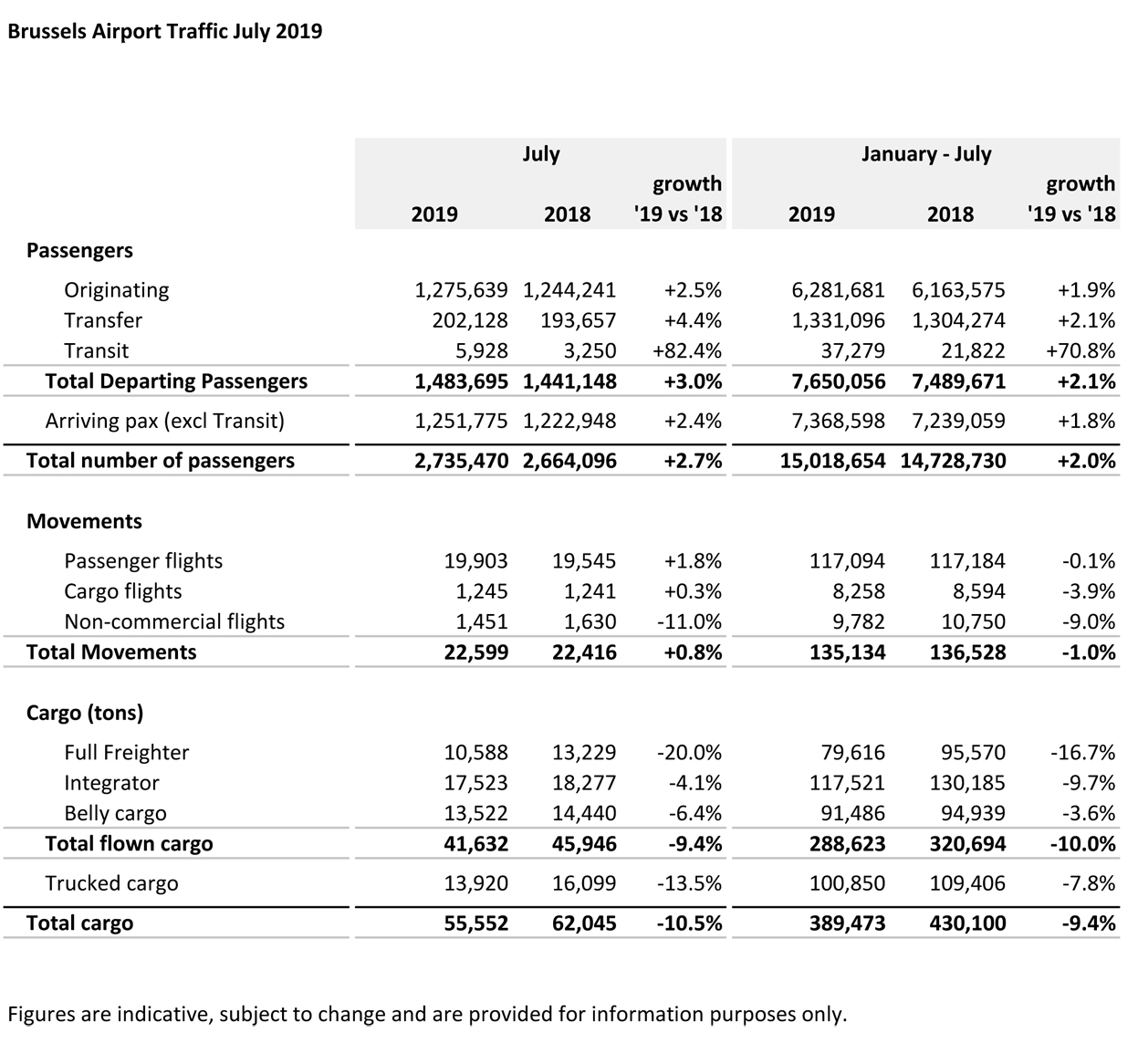