More than 2.4 million passengers flew via our airport in September, up 2% on September 2017. Cargo volumes at Brussels Airport also recorded a2.5% increase on the same period last year. In contrast, the number of flights decreased by 1.2% compared to September 2017.

The growth in the month of September applies to both short- and long-haul routes. Indeed, long-haul traffic witnessed a sharp 10% growth thanks to new destinations (Hong Kong, Shenzhen and Shanghai) and increased frequencies or seat capacity (Dubai, Bangkok and Kigali) in Asia, the Gulf region and Africa.

The number of local originating passengers grew by 4.3% in comparison to September of the previous year. The number of transfer passengers decreased by 9.8% against September last year, due to the reduction in the number of Brussels Airlines flights.

Cargo
Cargo volumes at Brussels Airport increased by 2.5% last month against the previous September. Over the entire third quarter, 177,330 tons of cargo were transported at Brussels Airport, an increase of 7.7% compared to the same period last year.
During the month of September, both the full-cargo segment (+ 9.5%) and belly cargo (+ 9.0%) recorded the highest growth, while integrator services declined (-4.2%) due to a number of cancelled flights at DHL.

The strong growth in cargo on board passenger aircraft is due to the new routes to Asia operated by Cathay Pacific and Hainan Airlines, and to Emirates’ doubling of capacity to the Gulf region. These new routes and additional capacity also account for the sharp 21% rise in imports via Brussels Airport last month, whilst exports retained the status quo in comparison to the previous September. 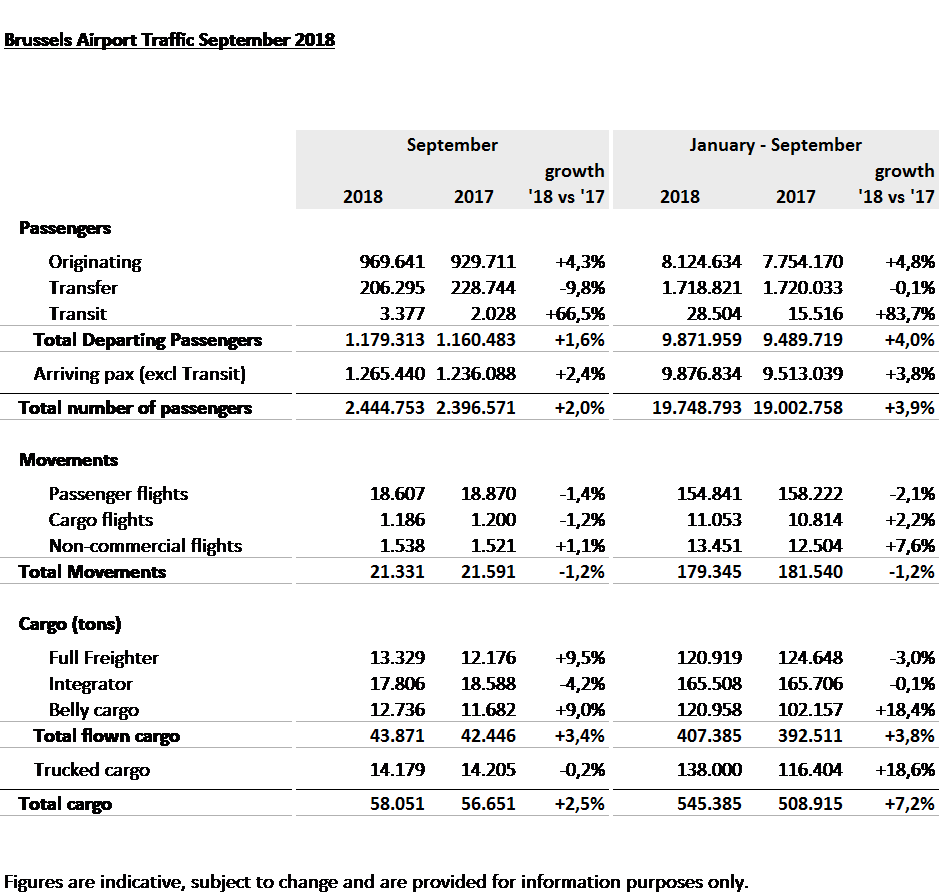