Brussels Airport is delighted and relieved to be welcoming passengers again since 15 June for non-essential, and mainly leisure, travel. Although recovery is slow and gradual, the trend is on the up as the choice of destinations increases week after week. Last June, which was a month of transition, Brussels Airport recorded a 96.5% drop in passenger numbers, compared to the same month last year. Cargo, on the other hand, and particularly the full-freighter segment, continues its growth, recording a 71.5% increase in full-freighter volumes in June. This sector is running full speed, while passenger activity is gradually picking up during this strange summer.

In June, 83,589 passengers passed through Brussels Airport, representing a decrease of -96.5% compared to June 2019. This decrease, which is slightly less than the past two months, can be explained by the small-scale resumption of passenger activity for all types of travel since 15 June. Therefore, although the decrease was 98.7% in the first week of June, it was ‘only’ 93.2% in the last week. The number of passengers departing and arriving has respectively dropped by -95.9 and -97.2%. In June, the airport went from around a hundred flights per week in the first half of the month, to around 500 flights per week since 15 June. In the whole month of June, 1,146 flights were carried out. First for essential travel and then for non-essential travel, mainly towards European destinations.

Cargo: very significant increase in full cargo and stability in the volumes carried

In June, cargo volumes at Brussels Airport showed only a very slight decrease (-0.5%) year-on-year. Air cargo volumes even increased by +4.8% for the first time since the start of the crisis. This result is much more positive than the global trend since, worldwide, freight volume is dropping by an average -25%, largely due to the very steep decrease in belly cargo, i.e. the cargo on board of passenger aircraft, which accounts for 50% of the volumes transported around the world.

Express volumes were up by +29.5%, while full cargo volumes grew by +71.5%. These spectacular increases compensate for the lack of belly capacity (-90,5%). Additional flights are operated by modern full cargo planes, as well as passenger aircraft which are converted for freight transport. These additional flights operate mainly during the day.

100 destinations at the beginning of July, 140 in August 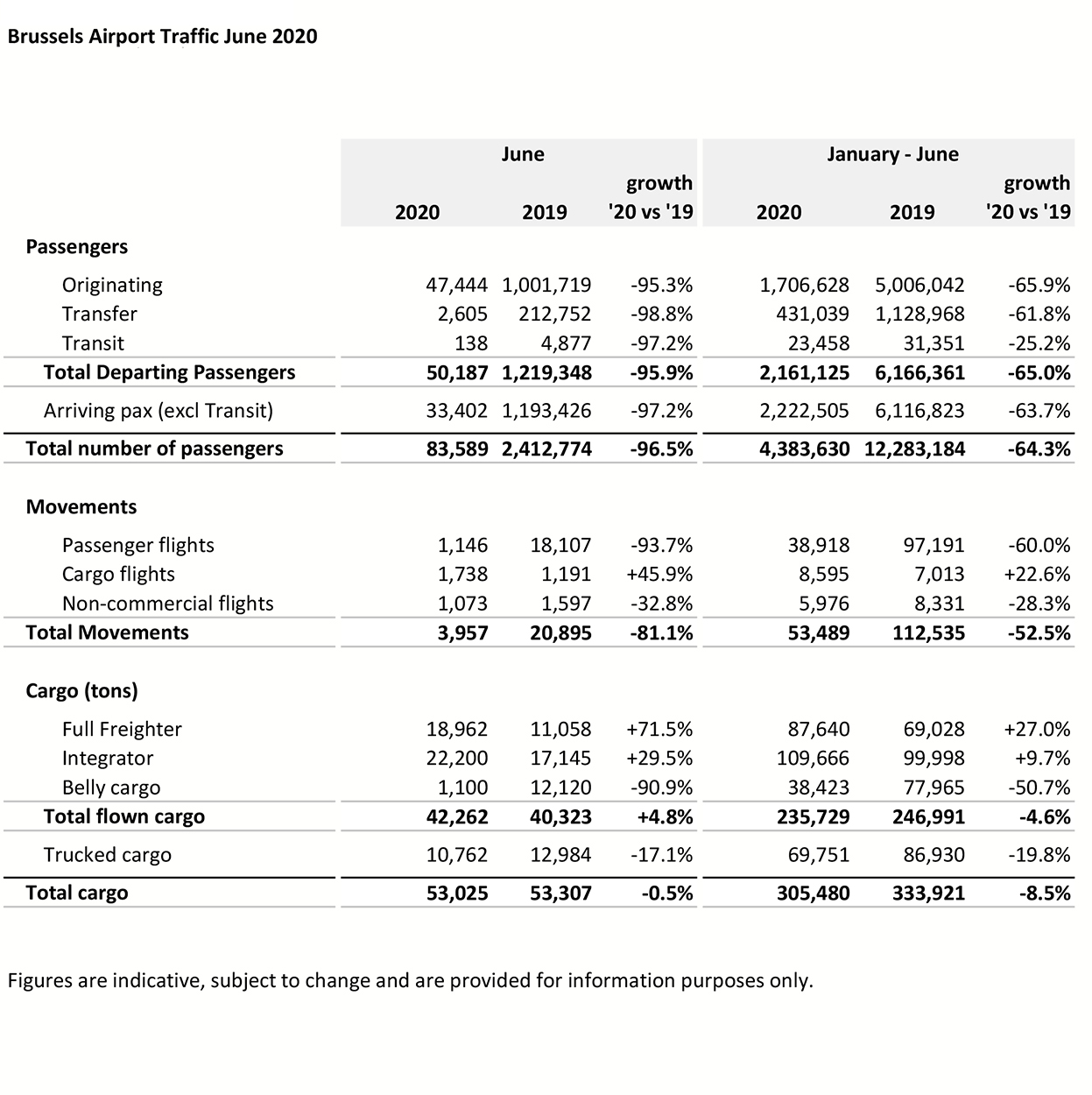