The long-haul segment recorded a 3% increase thanks to the new routes launched in 2018. However, growth remains significantly below that of previous months as a result of the national strike.

In the short-haul segment, the airlines seeing the largest increase in passenger numbers were Iberia, Aeroflot, Air Europa, Aegean and Air France.

Despite the strike, belly cargo increased by 6.6% compared to February 2018 due to the new long-haul routes that were launched in 2018. Trucked air freight rose by 13.1%.

On the other hand, freight on board of full-freighter aircraft dropped by 13.2% compared to the same period last year.

Integrator services too recorded a decrease in volume (-12.5%).

February 2019 saw a 5.8% fall in flight movements, which can be largely explained by the national strike of 13 February. The number of passengers per flight increased by 4.2%, going from 118 to 123. 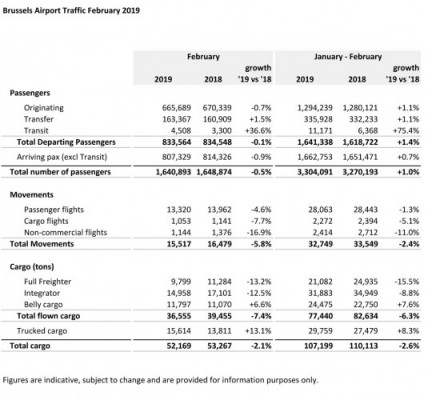