Brussels Airport achieved an all-time record of more than 5.2 million passengers in the first quarter of 2018. Long haul and transfer traffic in particular have risen sharply due to the considerable expansion of Brussels Airport’s intercontinental network in the past year. Total cargo tonnage at the airport increased by 2.3% in the first quarter compared to the same period last year, owing to a sharp increase in belly cargo and trucked air cargo.

Brussels Airport recorded an all-time passenger record for the first quarter of 2018, with over 5.2 million passengers catching a flight or landing at the airport, which represents a growth of 5.1% against the same period last year. Originating passenger volumes increased by 3.7%. Long haul traffic and in particular the number of transfer passengers (+ 13.4%) grew strongly compared to the first quarter of 2017. This can be attributed to the intensive expansion of Brussels Airport’s intercontinental network, notably to Asia and the Gulf region. 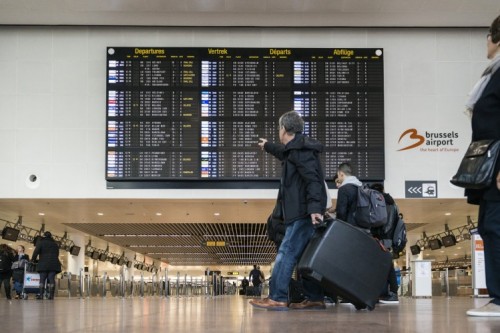 In comparison with the first quarter of last year, 27 additional long-haul flights now depart from Brussels Airport each week, 23 of which fly to Asia and the Gulf region. These include a second daily Emirates flight to Dubai (+7), the new Hainan Airlines routes to Shanghai (3) and Shenzhen (2), the new Cathay Pacific route to Hong Kong (4), the new Brussels Airline route to Mumbai (6), a fifth weekly Thai Airlines flight to Bangkok, the new Qeshm Air route to Tehran (1) and the Rwandair flights to Kigali (3).

Brussels Airport received 1,961,759 passengers in March, a 4.4% increase on the previous year and a new record for the month of March. Indeed, passenger volumes at Brussels Airport have never before approached the 2 million passengers per month mark so early in the year.

Both the number of originating passengers (+4.7%) and the number of transfer passengers (+13.7%) record a growth against the same month in 2017. The growth in originating passenger numbers was positively influenced by the start of the Easter holidays in the last week of the month. TUI fly in particular boasts strong growth figures. The growth in transfer passenger numbers can be attributed to the continued development of Brussels Airport as a Star Alliance hub by Brussels Airlines inter alia.

Freight transport at Brussels Airport increased by 3.2% in March 2018 in comparison to March 2017. Flown cargo increased by 0.3% and trucked cargo by 3.2% against the same month last year.

As in the previous two months, there was a decrease in the full-cargo segment, although this was less pronounced (-3.9%) than in January (-21.2%) and February (-18.4%). During the course of March last year, the first cargo companies ceased operations as a result of the Brussels noise fines.

Integrator services recorded a 5.9% decrease in the air cargo tonnage transported in March. Although the volume of express shipments was higher in the past month and rose sharply in comparison to March 2017, the weight of these products was less than that of cargo in March last year.

The decrease in the full-cargo segment was fully compensated by a strong increase in belly cargo (+16.0%). This increase was due to the launch of several new or additional long-haul flights by carriers including Emirates, Hainan Airlines and Cathay Pacific.

Trucked cargo tonnage increased sharply by 13.5% in comparison to March last year. The growth was primarily in trucked air cargo to Brussels Airport, with imports showing a very strong increase of 30%.