In July of this year, 6.7 million travellers flew from, to or via Amsterdam Airport Schiphol. On average, the aircraft arriving at Schiphol were larger (four additional seats per air transport movement). Due to a lower load factor (-1.1%) and a decrease in the number of air transport movements (-1.8%), the overall number of passengers fell by 0.7% this month compared to July 2018. The number of passengers who started or ended their journey at Schiphol increased by 0.9%, while the number of transfer passengers decreased by 3.4%. 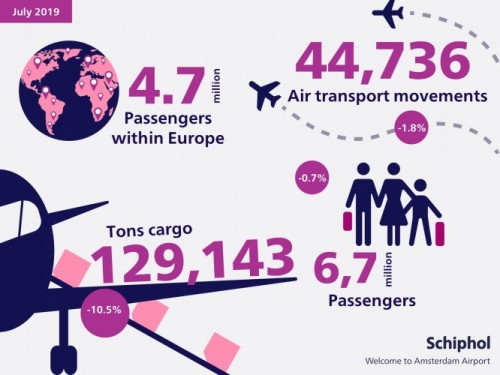 Cargo
The number of cargo flights decreased by 11.6% this month compared to July 2018. On average, the cargo load on board both freighters and passenger aircraft decreased. As a result, there was a 10.5% drop in cargo volume.

In July, Schiphol welcomed almost 2.0 million intercontinental passengers (-0.1%). Among the connections to the Americas, Colombia (+25.4%) and the United States (+7.3%) saw the most pronounced growth. Air traffic to Asia, particularly Japan (+19.1%) and Malaysia (+7.8%), also saw a big increase.