On 16 June, a former Flybe De Havilland Canada Dash DHC-8-400 (registered G-JECK) was being prepared for departure after long-term storage (inoperative since the 4th of March) but started rolling forward at Aberdeen Airport, Scotland, United Kingdom. The nose of the aircraft impacted the tail of a parked Loganair Embraer ERJ-145 (registered G-SAJS) and became lodged underneath the Embraer and lifting the latter’s right main gear off the ground.

Nobody got hurt during the mishap, but both aircraft got damaged. The British Air Accident Investigation Branch (AAIB) has launched an investigation. Loganair confirmed that no passengers or crew members were on board the aircraft, the airline said that a replacement aircraft was available to bring the passengers to their destination.

A former Flybe DHC-8-400 (G-JECK) not flown since Mar 4th, moved forward until it collided with the tail of a Loganair ERJ-145 (G-SAJS) lifting its right wing up. No one was hurt. Unknown damage occurred to both aircraft. @_Alpha_Deltahttps://t.co/3fXM9SwJTr pic.twitter.com/b2EmWtbno8 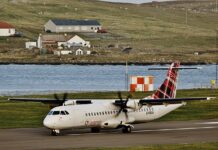 Scottish airline Loganair is up for sale 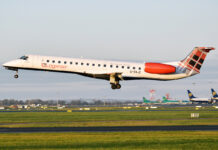