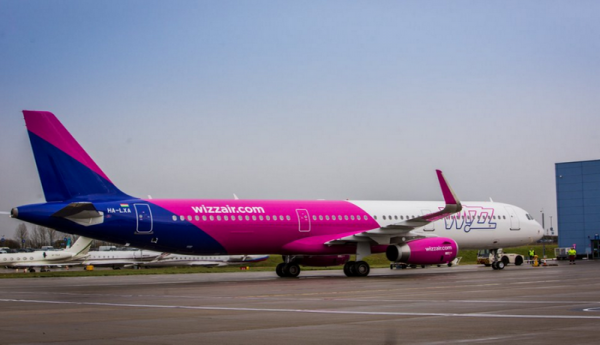 Wizz Air last week began operations with its first 230-seat Airbus A321ceo1 and today invited media representatives from several of the company’s largest markets aboard for a demonstration flight at London Luton Airport, one of Wizz Air’s busiest airports and the first destination for the new Budapest-based aircraft.

“The biggest benefit of the A321 for our passengers is the lower fares we can offer as result of its greater efficiency versus our current A320s.” said John Stephenson, Wizz Air executive vice president. “The A321 boasts a new, modern interior, and will further lower our environmental footprint.”

Wizz Air’s first A321ceo began daily commercial service between Budapest and London Luton Airport on 20 November. Following this delivery, WIZZ has 26 additional current-production A321ceo aircraft on order with Airbus for delivery through 2018, including the second in December and nine in calendar year 2016. The first four A321ceos will be based in Budapest and subsequent deliveries will be deployed on the most popular routes in the growing Wizz Air network. Earlier this year, Wizz Air made headlines at the Paris Air Show with a further order of 110 Airbus A321neo2 aircraft for delivery from 2019 through 2024.

“We are delighted to welcome Wizz Air as a new A321 operator. The A321ceo will increase the capacity on Wizz Air’s most popular routes and allows the airline to benefit from the lowest cost per seat of any single aisle aircraft,” said Christopher Buckley, executive vice president, Africa, Europe and Asia Pacific at Airbus. “We are confident that the A321ceo will help Wizz Air efficiently address growing demand for air travel while benefitting from the best-in-class comfort, operating economics and fuel-efficiency of the benchmark A320 Family.”

Adding the A321ceo, the largest member of the A320 family, positions Wizz Air to meet growing passenger demand for low-fare air travel in Central and Eastern Europe. In the first half of fiscal year 2016 (year ending March 31, 2016), Wizz Air carried 10.7 million passengers, a 20 percent increase in traffic over the same period in fiscal year 2015, and its load factor grew to 90.7 percent.

1 Airbus A321ceo stands for current engine option and is the model being delivered to Wizz Air through 2018. Wizz Air uses the IAE V2500 engine on its A320ceo and A321ceo aircraft.

2 Airbus A321neo stands for new engine option and promises even more efficient operation with new technology engines. Wizz Air has not yet made a choice for the engine on its newly ordered 110 Airbus A321neo aircraft that will begin being delivered in 2019.