Wizz Air, the largest low-cost airline in Central and Eastern Europe,today announced further growth of its low fare route network and launched three new services from Budapest to Liverpool and Reykjavik, commencing in March as well as a Budapest-Ibiza service commencing in June.

With this announcement, Wizz Air is now expanding its Hungarian offer by connecting a 23rd  country accessible with Wizz Air’s low fares – Iceland. Reykjavik is considered one of the safest, greenest and cleanest capitals in the world, and is a very popular tourist destination, thanks to various cultural events and places of interest. For example, Reykjavik is home to the largest whale exhibition of its kind and the Pearl – a sparkling landmark building in the capital. Iceland also offers an array of unique tourist attractions such as various nature exploration tours, ice fishing and, of course, seeing the Northern Lights in person.

Ibiza, another new WIZZ destination from Budapest, will be operated as a summer service from 18 June until 17 September, which is the peak season for the renowned beach parties and electronic music festivals the Mediterranean island prides itself in.

Liverpool is the fourth UK destination (along with London Luton, Birmingham and Glasgow) now accessible on Wizz Air’s low fares from Budapest and is a very popular tourist destination thanks to The Beatles, the group that brought the city a proud label from Guinness World Records of being the “World Capital of Pop.”

The three new routes are already on sale from HUF 10.990* and can be purchased on wizzair.com. 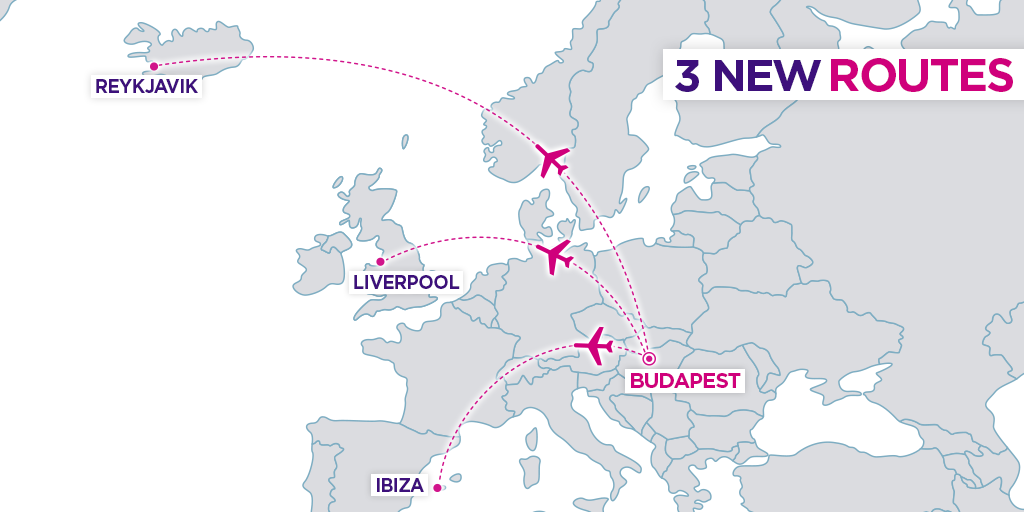 József Váradi, Chief Executive Officer of Wizz Air said: “I am happy to announce today three new routes from Budapest to such attractive destinations as Reykjavik, Liverpool and Ibiza.  Since 2004 when the airline took off for the first time, we have earned the loyalty and trust of almost 16 million passengers on our Hungarian route network, while closing 2015 with a record of 2.9 million passengers carried.  We continue to enhance our customer experience while offering our lowest possible fares to the market. We encourage our customers to tailor their travel experience with WIZZ according to their own needs. Our very low fares will meet your needs if you are traveling on a budget, and if you seek extra comfort, you can benefit from our numerous enhancement products and services. The newest routes give our passengers a great choice of summer vacation destinations, as well as attract more tourists to Hungary and help further establish Budapest’s position of being one of the best cities in the world. “