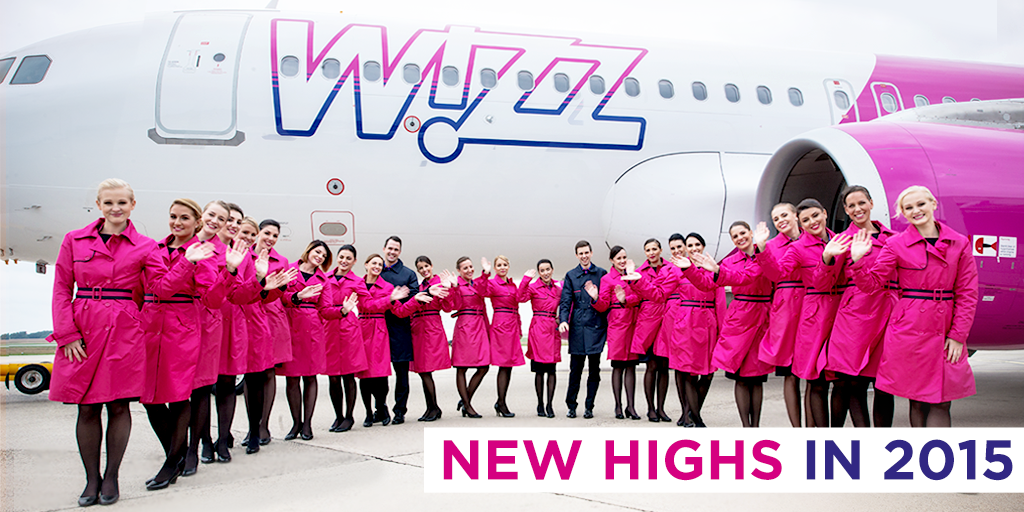 Wizz Air, the largest low-cost airline in Central and Eastern Europe, made great strides in calendar year 2015 and established itself as one of the best-performing ultra-low-cost carriers.

Milestones for 2015 include a successful listing on the London Stock Exchange, a major brand refresh and livery update for its aircraft, a record aircraft order from Airbus at the Paris Air Show, and the entry into service of its first A321 – the first airline in Europe to operate the aircraft with 230 seats.

At year-end, the airline had flights on sale to 118 destinations in 38 countries with more than 400 routes. Wizz Air’s fleet consisted of 63 Airbus A320 aircraft and two A321 aircraft based at 22 bases throughout Central and Eastern Europe. Wizz Air added four new bases in 2015 – Tuzla, Debrecen, Kosice and Lublin. Wizz Air also announced a 23rd base to open in July in Iasi.

At the end of 2015, Wizz Air was operating 81 new routes begun during the year and had already announced 32 new routes for 2016.

József Váradi, Chief Executive Officer of Wizz Air, said: “Thanks to the hard work of our people and the incredible loyalty of our passengers, 2015 will go down as one of our best. Our continual growth shows the acceptance of the Wizz Air business proposition of low fares and service with a smile, which separates us from other low-cost carriers in the region. The European traveller is not content just with a low fare seat – the European traveller also wants choice, as well as to be treated with respect. These are all hallmarks of the WIZZ experience and our strong performance in 2015 tells me this resonates with our passengers.”

The company also launched a refreshed brand and aircraft livery to better reflect the changing travel expectations of its customer base. Wizz Air’s online presence was increased as well, with the main webpage now available in 23 languages and a version of the website optimized for mobile devices, joining the airline’s app for iOS and Android operating systems.

The company opened a new maintenance hangar at Budapest International Airport in August which, together with Wizz Air’s cockpit and cabin training facility, solidifies the airline’s role a leading driver for Hungary’s aerospace industry. Wizz Air also inaugurated a cadet pilot program in 2015 to recruit and train aspiring individuals from Hungary and surrounding countries to ensure a pipeline of talent needed for future growth.

Wizz Air was recently named Value Airline of the Year by Air Transport Worldmagazine for its success in 2015.