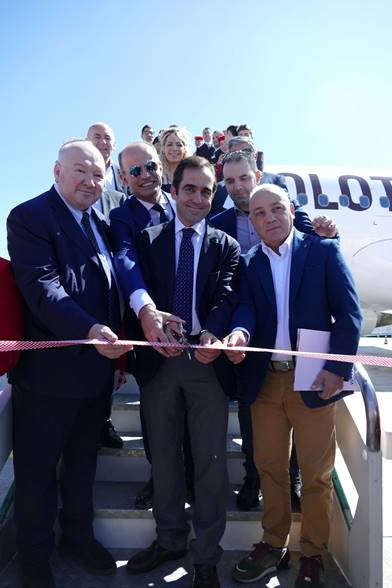 Volotea, the airline of mid and small‐sized European cities, has inaugurated this morning its thirteenth base, in Cagliari, where two Airbus A319 will be permanently based to operate 15 routes, ten of which exclusively offered by Volotea.

Volotea has inaugurated today its thirteenth base in Cagliari, the fifth in Italy. The airline bases two Airbus A319 in the Italian airport to allow a significant increase in routes and frequencies. Main representatives of the Sardinian regional government, Cagliari’s chamber of commerce, SOGAER and Carlos Muñoz, Founder and CEO of Volotea attended the event, consisting in an inaugural flight around Sardinia for 120 representatives of regional institutions and local media.

Since Volotea started operations in Cagliari in 2012, Volotea has carried over 750,000 passengers, increasing its number of customers’ year-on-year. In 2018, the airline has carried 270,000 passengers from Cagliari, up by 66% in comparison to the previous year and achieving an average 94% seat load. For 2019, Volotea will offer 414,000 seats, increasing its capacity by 44%.

“We are very happy to launch our fifth Italian base in Cagliari, a city with a strategic role in our development plans– Carlos Muñoz stated. Thanks to the opening of the base, we will further strengthen the connectivity of Sardinia. After the announcement of five new routes for this summer, we are working to offer to all Sardinians the possibility to fly even easier during the whole year. In our continued effort to support the local economy, we have also created in Cagliari 50 new jobs thanks to this base opening”.

“Today we collect the results of a partnership started in 2012, that has already brought important traffic and passenger growth from the very beginning– SOGAER President, Gabor Pinna stated-. Through these years, a consolidated collaboration has been built with Volotea in order to offer a rational and well-defined bunch of attractive destinations to meet market demands. Volotea trusted in Cagliari airport and SOGAER has believed in Volotea’s business case. This base inauguration is the natural evolution of this partnership and allows a positive look to the future. In this environment of mutual trust and collaboration, we are heading to a particularly strong holiday season. And we hope that the following months will allow our joint objective of growing and to offer our passengers the wide offer they deserve and request”.

Volotea also operates in Olbia’s Airport, transporting in 206,000 passengers in 2018 and in Alghero, where last year has transported 51.000 passengers. Since 2012 Volotea has transported in Sardinia more than 1,6 million of passengers. With the launch of Cagliari’s base, Volotea will offer in Sardinia more than 700,000 seats and 26 international and national routes to connect the Italian island with different destinations.

In the first quarter of 2019, Volotea achieves in Cagliari Airport a 92.54% recommendation rate among its client, and a punctuality rate of 85.4%. Volotea has been the most punctual low-cost airline in Europe, according to FlightStats.com.

Volotea, the airline of European mid and small-sized cities, has carried more than 22 million passengers since its first flight in 2012 and 6.6 million in 2018.

In 2019, Volotea is opening 41 new routes to serve a lineup of 319 routes, operating flights to more than 80 mid and small-sized European cities in 13 countries: France, Italy, Spain, Germany, Greece, Croatia, the Czech Republic, Portugal, Malta, Austria, Ireland, Luxembourg and Morocco. The airline expects to carry more than 7.5 million passengers in 2019.

Volotea has currently twelve bases: Venice, Nantes, Bordeaux, Palermo, Strasbourg, Asturias, Verona, Toulouse, Genoa, Bilbao, Marseille and Athens. These last three have been inaugurated in 2018. Volotea will inaugurate a new base in Cagliari on May 30th 2019.

Volotea employs over 1,200 people in 2019 capitalizing in its activity growth. This year 200 new positions have been created.

Volotea operates its network with 36 aircraft, Boeing 717s and Airbus A319s, after adding six additional aircraft in 2019. Both models are recognized for their comfort and reliability, with Volotea offering reclining seats which are 5% wider than the average in airlines.

The Airbus A319 is the aircraft model selected for its future growth and will allow the company to increase its passenger capacity by 25% to 156 seats and to serve longer routes.

Volotea has been the most punctual low-cost airline in Europe in the first quarter of 2019 with 90.4% punctuality rate, according to FlightStats.com

Volotea will fly to 6 Algerian cities from Marseilles