A giant metal engine piece just landed in a Broomfield, Colorado, person’s yard after the plane flying over experienced an explosion. The photo above appears to show an engine nacelle inlet lip. Its general dimensions match the PW4000 engine that powers the United Airlines Boeing 777-200.

The plane was later identified as Boeing 777-200 registered N772UA, operating United Airlines flight UA328 that took off from Denver, Colorado, runway 25 with destination Honolulu, Hawaii, on Saturday 20 February at 13:04 (UTC-7).

Additional debris from the Boeing 777’s engine scattered across a turf field at Commons Park.

After the incident, the aircraft returned to Denver and landed safely on runway 26. It was met by emergency crews as a precaution. The 231 passengers and 10 crew were unharmed.

The NTSB has opened an investigation into the incident. 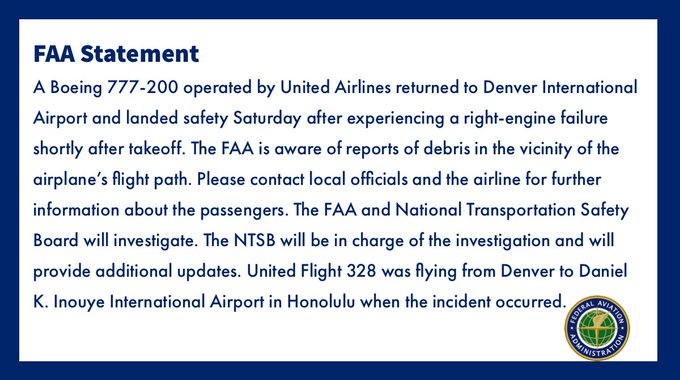 This is the moment United flight 328 landed in DIA

You can see damage to right engine.

From the Dash Cam of Zach Allen In Broomfield: https://t.co/6Syowuy9yI pic.twitter.com/SVqE55TlPN