SKY, a Chilean-based low-cost carrier, has taken delivery of its first A321neo leased from Air Lease Corporation, becoming the first airline in Chile to operate the A321neo.

SKY’s A321neo aircraft are powered by CFM Leap-1A engines and can seat up to 238 passengers in a two-class layout. SKY is the first airline in South America to operate the A321neo with a high-density cabin configuration.

The A321neo has a 95 percent airframe commonality with Airbus’ A320 Family, fitting seamlessly into SKY’s existing fleet of 19 A320neo. This aircraft incorporates new generation engines and Sharklets, which together deliver more than 20 percent fuel and CO2 savings, as well as a 50 percent noise reduction. Additionally, The A321neo shares a common type rating with other members of the Airbus A320 Family, which allows A320 Family pilots to fly the aircraft without additional training.

SKY has been an Airbus customer since 2010 and became an all-Airbus operator in 2013. The A321neo will allow SKY to further expand its route offering in Latin America in the near future.

Airbus has sold over 1,100 aircraft and has a backlog of nearly 430 aircraft to deliver in Latin America and the Caribbean. Currently, Airbus has over 660 aircraft in operation throughout the region, representing approximately 60 percent market share of the in-service fleet. Since 1994, Airbus has secured nearly 70 percent of net orders in the region. 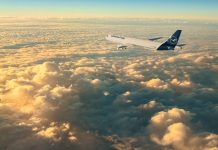