Airbus has delivered the 100th aircraft, an A321, to China’s largest all Airbus operator Sichuan Airlines. The aircraft was handed over to Sichuan Airlines during a delivery ceremony in Hamburg, Germany. Equipped with Sharklet fuel saving wing tip devices and powered by IAE V2500 engines, the aircraft  features a comfortable two class cabin, seating 194 passengers (8 business and 186 in economy).  Including the latest delivery Sichuan Airlines’ fleet comprises 93 A320 Family aircraft and seven A330 Family aircraft.

“We are happy to receive the 100th aircraft from Airbus. The latest addition to our all Airbus fleet will further increase our capacity to satisfy the growing market demand for air traffic in China,” said Li Haiying, Chairman and President of Sichuan Airlines. “We are expanding our route networks not only across China but also to Asia, Australia, Europe and North America. With a 100-strong fleet comprising both Airbus A320 Family and A330 Family aircraft, we are confident to take our passengers to more destinations and offer them a more comfortable flight experience.”

The partnership between Sichuan Airlines and Airbus dates back to 1995 when the airline introduced an A320 to become the first airline to operate an Airbus fly-by-wire aircraft in China’s mainland. It was also the first airline to operate Airbus A321 in China’s mainland. In 2009, the airline received the first A320 assembled at the Airbus Tianjin Final Assembly. In 2010, Sichuan Airlines received its first A330 aircraft.

Based in Chengdu, the capital of Sichuan Province in South-Western China, Sichuan Airlines has a network to some 200 domestic destinations including Beijing, Harbin, Hangzhou, Xi’an and Sanya as well as international routes to Asia, Australia, and North America.

The A321 is the largest member of the best-selling single aisle A320 Family. While passengers benefit from the A321’s state-of-the-art cabin design, wider seats and enhanced comfort, airlines profit from the unique operational flexibility of Airbus’ single-aisle aircraft.

The A320 Family is the world’s best-selling single aisle product line with almost 11,700 orders to date and more than 6,500 aircraft delivered to 400 customers and operators worldwide. Thanks to its widest cabin, all members of the A320 Family offer the industry’s best level of comfort in all classes and Airbus’ 18-inch wide seats in economy as standard. 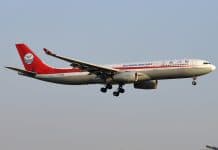