Several airlines, including Qantas, Air Canada, Malaysia Airlines and Singapore Airlines, have adapted their routes to the Middle East due to escalating tensions between Washington and Tehran. Lufthansa has cancelled a flight to the Iranian capital.

Air France and KLM, for their part, have suspended until further notice “all overflights of Iranian and Iraqi airspace“, a few hours after Iranian strikes against two bases sheltering American soldiers in Iraq. Flights to a number of Southeast Asian destinations and destinations in the Middle East will be operated by using alternative routes. Air France-KLM will continue to monitor the region, and will stay in contact with authorities.

In Germany, Lufthansa announced that it had cancelled its daily flight to Tehran.

Qantas’ decision to reroute its Perth-London QF9 flight to avoid Iranian airspace could mean adding a Singapore stopover to refuel the Boeing 787-9.

On Tuesday evening, the US Federal Aviation Agency (FAA) prohibited American civil planes to fly over Iraq, Iran and the Gulf of Oman, in the wake of the attacks. These flight restrictions come after Iran sent missiles against the bases of Aïn al-Assad and Erbil in Iraq, used by the American army, in reprisal for the American strike which had killed the Iranian general Qassem Soleimani last week in Baghdad. 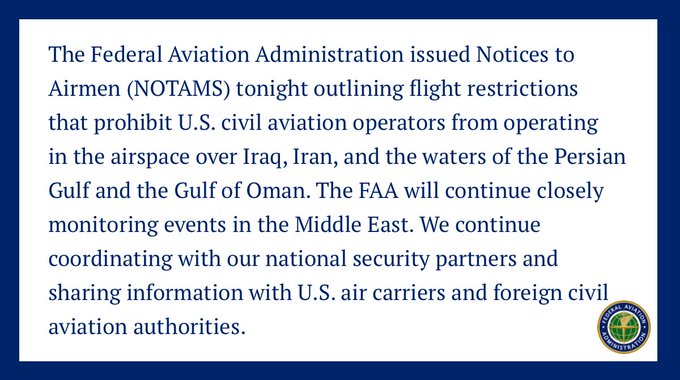 How can the aviation industry reduce damage to the environment?