The cancellations affect around five percent of the flights originally planned during the summer months. Initially, 75,000 SAS flights were scheduled for May, June, July and August.

The airline SAS cancels around 4,000 flights in May, June, July and August, press officer John Eckhoff confirms to E24.

75,000 SAS flights were originally scheduled for that period. This means that more than five percent of the company’s flight offer will be cut this summer.

“Those who are affected will be rebooked to the nearest flight. For most people, it means the same day,” said Eckhoff.

“There is both a shortage of personnel and to some extent also delays in deliveries of aircraft. Many people go through safety training or refresher courses in a simulator. There are many who have been hired since we resigned and laid off in connection with the pandemic,” Eckhoff explained.

Several other European airlines have reduced summer offers, and among other things pointed to a lack of personnel.

SAS is struggling financially and has cut sharply the number of pilots through the pandemic. The company has also made structural changes. Among other things, they have established a subsidiary, where dismissed pilots and cabin crew must apply for work again.

Roger Klokset, leader of the Norwegian SAS Pilots’ Association, in an e-mail to E24 says that 450 of their dismissed pilots are still unemployed. He believes that it takes much longer to recruit completely new pilots, and claims that lights and lanterns are now being sought throughout Europe to fill courses. 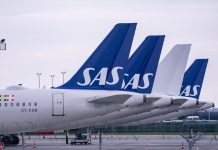