On 16 May 2022, a Ryanair Boeing 737-800 (registered EI-EVE) operated flight FR9130 from Manchester, United Kingdom, to Faro, Portugal, but diverted to Nantes, France, over unruly passengers. They were reportedly Rangers FC fans on their way to Seville to support their team at the Europa League soccer final on Wednesday (a game won by Eintracht Frankfurt in a penalty shootout).

Before taxiing out to the runway, one passenger was already escorted off the aircraft.

After the diversion in Nantes, five more disruptive passengers were kicked off the flight.

A Ryanair spokesperson said that one passenger that required medical attention quickly recovered from his illness and was able to continue his journey to Faro, where the flight arrived with a delay of around 1 hour and 15 minutes.

“Ryanair apologises sincerely to passengers for the inconvenience caused by this delay.”

Lad who tweeted misogynistic abuse at me earlier has been chucked AFF the flight. Can’t even make this stuff up. https://t.co/gdfZfgFHt2 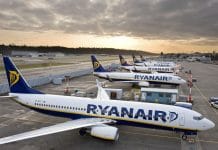