The Republic Airways Holdings group began operating under creditor protection Thursday in order to launch a restructuring, explaining its poor financial health by a shortage of pilots in the United States. Flights from subsidiary Republic Airlines and Shuttle America continue to be operated normally.

Operating regional flights on behalf of American Airlines, Delta Air Lines and United Airlines, and best customer for the Bombardier CSeries, the US company announced on February 25, 2016 to have used Chapter 11, through which companies can be protect from prosecution by creditors for restructuring. The debt reached $ 2.97 billion for assets of 3.56 billion, according to the declaration of Republic Airways to New York bankruptcy court, and its president Bryan Bedford said in a statement it had “worked hard” to avoid the use of Chapter 11: “Our filing today is a result of our loss of revenue during the past several quarters associated with grounding aircraft due to a lack of pilot resources, combined with the reality that our negotiating effort with key stakeholders shows no apparent prospect of a near term resolution“. Many aircraft are already grounded for lack of pilots, says the CEO. Day to day perations are not affected, but the fate of 6,000 employees is not explicitly mentioned except to say they will be paid and that collective agreements with the unions will be “honored”.

Republic Airways, based in Indianapolis, operates through its two subsidiaries more than 1,000 daily flights to 105 destinations in the United States, Canada, the Bahamas and the Caribbean, with a fleet entirely made of 50 to 99 seats Embraers (its last Q400s leave to Flybe), but it  had among others ordered 40 CS300s (plus many options), making it the best customer for the CSeries family. It is the first operator in the world of E-Jets, with a combined fleet of about 230 aircraft.

The latest US company to have used Chapter 11 was American Airlines in 2011 and as its rival announced it was still too early to assess the medium-term impact of the bankruptcy of Republic Airways on regional operations. 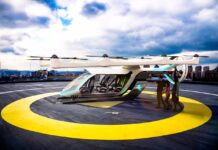 Embraer and Republic Airways firm up order for 100 E175s

After Boeing and Airbus sky art: Embraer is drawing