Bombardier Commercial Aircraft today welcomed Qazaq Air to the family of Q400 aircraft operators and joined the airline in introducing the technologically advanced turboprop to local government and aviation industry representatives, regulators, other invited guests and media during a press conference in Astana, Kazakhstan. Qazaq Air, a subsidiary of Samruk Kazyna, Kazakhstan’s Sovereign Wealth Fund, has announced that it will launch domestic service in Kazakhstan with three Q400 aircraft leased from Falcon Aviation Services LLC of Abu Dhabi.

“We selected the Q400 aircraft because it has the speed and range required to service the long sectors in the Kazakh market, and has proven its reliability in regions with hot and very cold temperatures,” said Blair Pollock, Project Director, Samruk Kazyna. “In addition, the aircraft’s cabin will provide a quiet, comfortable experience for our passengers, and our airline will undoubtedly benefit from the aircraft’s excellent operating costs.

“We thank Falcon Aviation for providing us with their aircraft and for all their support in the months running up to this launch.  We look forward to improving the air transport offering to the Kazakh people.  Many of the 12 routes on which the Q400 aircraft will operate are not currently served by any other carrier.  Qazaq Air — using the Q400 aircraft — will be connecting people and helping them benefit from the growth of the Kazakh economy,” added Mr. Pollock.

“We are delighted that the Q400 aircraft has been selected for the development of the regional air transportation network in Kazakhstan and we wish Qazaq Air much success,” said Colin Bole, Senior Vice President, Sales and Asset Management, Bombardier Commercial Aircraft. “The Q400 aircraft’s certification for operations down to -54o C, and notably its successful operation in Canada where approximately 90 are in service, are testament to its capability to meet Qazaq Air’s growth and development plans.” 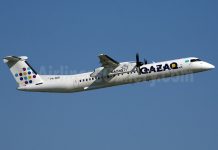 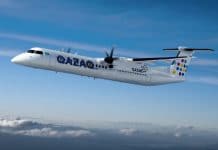 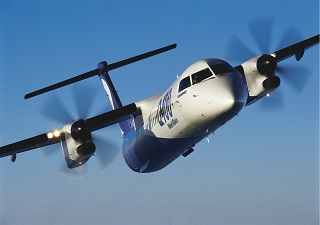