Norwegian has today commenced its first route to Brazil with a brand-new non-stop service from London Gatwick to Rio de Janeiro. The new flights offer consumers in the UK an affordable way to travel to Brazil with fares from £169.90 one-way in Economy and £449 one-way in Premium, available to book at www.norwegian.com/uk/destinations/rio-de-janeiro. Passengers will fly in comfort on brand new Boeing 787 Dreamliner aircraft offering up to 344 leather seats in modern economy and Premium cabins.

Norwegian’s new flight to Brazil has broken the current monopoly with the new service to Rio de Janeiro–Galeão International Airport (GIG) from London Gatwick Airport, allowing consumers to explore the beauty of Brazil at an affordable price.

Bjorn Kjos, Chief Executive Officer at Norwegian said: “We are delighted to continue to make travelling to South America affordable for all with our new service to Brazil. Our route to Rio de Janeiro breaks the monopoly on direct flights between the UK and Brazil and builds upon our expanding services to South America.

“Our extensive network from London Gatwick will give both leisure and business travellers more choice and flexibility when flying with Norwegian on our long-haul routes. Our modern fleet of aircraft allows customers to enjoy their trip from the moment they step on board by flying in modern more environmentally friendly and fuel-efficient aircraft.”

“Brazil is known for its wonders and the hospitality of its people and Brazilians across the country wait for British visitors with open arms.”

“Brazil further increases Gatwick’s network to the business opportunities provided by the BRIC country economies. While Brazil’s biodiversity, beaches and mountains are famed the world over – making this a highly desirable location for both our business and leisure passengers.

“Today’s new connection is the latest demonstration of the wider trend we are seeing at Gatwick of our airlines increasing frequencies and launching new routes”.

At London Gatwick, Norwegian offers a network of 14 long-haul flights to 12 popular US destinations and two routes to South America – Buenos Aires, Argentina and Rio de Janeiro, Brazil. The airline serves more destinations in the USA nonstop from London Gatwick Airport than any other airline.

The new route to Rio de Janeiro will enhance Norwegian’s existing service to South America, as the airline already offers direct flights from London to the Argentinian capital, Buenos Aires, as well as a series of domestic flights within Argentina from Buenos Aires to Mendoza, Cordoba, Salta, Iguazú, Bariloche and Neuquén.

Earlier this year Norwegian became the first low-cost airline to introduce free Wi-Fi on intercontinental flights. Passengers will be able to stay connected in the skies with the rollout of free and premium high-speed Wi-Fi connectivity on the carrier’s Boeing 787-9 Dreamliner. More than 50 per cent of Norwegian’s 787-9 Dreamliner fleet is expected to offer in-flight connectivity by 2020.

Norwegian carries more than 5.8 million UK passengers each year to over 50 global destinations. The airline was ranked the most fuel-efficient airline on transatlantic routes by The International Council on Clean Transportation (ICCT) and has one of the youngest aircraft fleets in the world with an average age of 3.8 years. 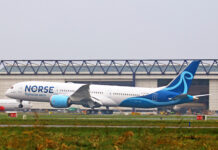