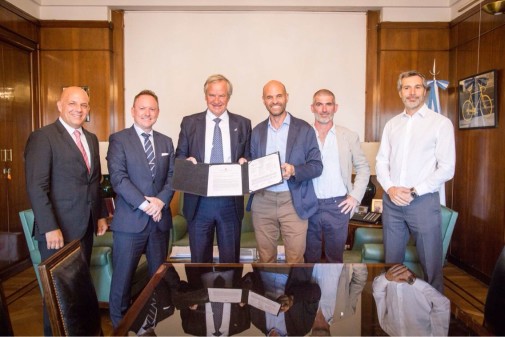 The low-fare airline Norwegian Air Argentina (NAA) received today the Air Services Operator Certificate (AOC) from the National Government. The document recognizes the company as a commercial airline and certifies that it complies with safety and quality standards to carry out aeronautical operations and activities, in accordance with the law of the Argentine Republic.

Bjørn Kjos, CEO of Norwegian, said: “We are honoured to receive the authorization by the Argentine Government and we thank the Minister of Transportation Guillermo Dietrich and his team for the trust in Norwegian. This is great news that shows that we are getting closer to the start of our operations in Argentina with our safe, efficient and friendly service”.

Ole Christian Melhus, CEO of Norwegian Air Argentina, said: “We received the AOC with great enthusiasm and honour and it is a major milestone for our journey in Argentina. We also thank the director of the National Administration of Civil Aviation, Tomás Insausti and all his team for their professionalism and dedication. Now we will focus on starting to offer safe flights and affordable fares to millions of passengers soon, as well as job creation and contributing to the stimulation of the local economy”.

Norwegian Air Argentina is an Argentine airline and was set up in March 2017. On December 11th, 2017, the Argentine Government granted Norwegian Air Argentina 152 routes; among them, 72 domestic destinations and 80 international. The company received its first aircraft B 737-800 the past January 15th with local Hero Astor Piazzolla as the Tail Fin Hero.