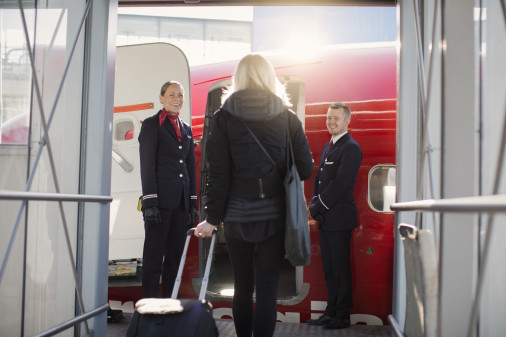 Norwegian carried more than 3.5 million passengers in August. The unit revenue increased by three percent and the load factor was 90 percent, up 0.4 percentage points.

A total of 3,503,913 passengers chose to fly with Norwegian in August. The total traffic (RPK) increased by five percent and the capacity growth (ASK) was four percent.

“Our growth is slowing down, in line with our strategy, and we are glad to see an increased unit revenue this month compared to the same month last year. We are also pleased that bookings are looking solid going forward, especially on intercontinental routes and in the Nordics,” said Acting CEO and CFO of Norwegian, Geir Karlsen.

The continued fleet renewal contributed to a further reduction of CO2 emissions in August from 70 to 69 grammes per passenger kilometre compared to the same period last year. With an average age of 3.8 years, Norwegian has one of the world’s most environmentally friendly fleets. Thanks to its new fleet, the company has reduced its per passenger emissions by 30 percent since 2008.

Norwegian operated 99.4 percent of the scheduled flights in August, whereof 76,2 percent departed on time. The company’s on-time performance was impacted negatively due to general summer delays in European airspace, which was outside of Norwegian’s control. The use of wet-lease aircraft in August also affected the on-time performance negatively.

Despite these encouraging figures, Norwegian is unable to pay back the bonds maturing at the end of this year and is proposing a new deal to bondholders:

Norwegian Air Shuttle (“NAS” or the “Company”) is executing on its strategic plan from growth to profitability and cash generation. To ensure successful operations and adequate liquidity headroom, NAS is requesting to extend the maturity dates of its two unsecured bonds in exchange of a security package backed by the attractive take-off and landing slots at London Gatwick Airport.

The Company is requesting an extension for NAS07 and NAS08 to November 2021 and February 2022, respectively. The Company will in exchange offer the unsecured bondholders a security package consisting of a pledge over all shares in Norwegian Air Norway AS (“NAN“), which will hold the attractive take-off and landing slots at London Gatwick Airport.

Norwegian’s Gatwick portfolio currently consists of take-off and landing slots which has an independent valuation from a well-reputed third-party in excess of the current nominal bond value for NAS07 and NAS08 of USD 380 million. These are important operational rights for the Norwegian Group, facilitating the feeding of passengers between our European short-haul network and intercontinental long-haul network, an important part of Norwegian’s profitability strategy going forward. Previous transactions in the market demonstrate the ability to monetize on slots at Gatwick.

The Company’s operational performance continues to improve since the Q2 2019 Report mid-July. The Company is on track to reach NOK 6-7 billion in EBITDAR in 2019 as stated in the Q2 2019 Report, with further improvement expected next year. This would be at all-time high levels, despite the well-known issues with Rolls-Royce engines on the Company’s Dreamliners and the grounding of the Boeing 737 MAX fleet.

As reported, NAS continues to prioritize delivering on the announced initiatives:

• Norwegian is on track to reach the targeted NOK 2,000 million cost reduction for 2019. Further cost improvements are expected in 2020 and 2021
• NAS is working to shorten the working capital cycle through new payment technologies and further capacity
• The shareholding in Norwegian Finans Holding ASA (“NOFI”) has been sold with a price of NOK 2,218 million, with the net proceeds of NOK 934 million to be received ultimo Q4 2019
• The negotiations regarding the establishment of the joint venture for a part of the aircraft fleet are progressing and will be announced when concluded
• In 2019, Norwegian has sold aircraft with proceeds net of debt repayment of USD 127 million. Further divestment is put on hold until the Boeing 737 MAX is back in operation.

Despite significant operational progress, the working capital has been negatively affected by the Rolls-Royce engines issues and the grounding of the MAX fleet by approximately NOK 1.5 billion. In addition, terms in the credit card acquirer market have tightened. In Q2, Norwegian’s customers had bought, not travelled, tickets for NOK 9 billion. Compared to Q2 2018, the amount not received from credit card acquirers has negatively affected working capital by approximately NOK 4 billion.

Norwegian’s 60/40 summer/winter seasonality effect requires a build-up of liquidity reserves before the winter season. The proceeds from the sale of the NOFI shareholding will strengthen the balance sheet and liquidity. NAS has ongoing discussions with lessors with the goal to defer payment schedules. Well publicised discussions with aircraft and engine manufacturers are ongoing, all with the goal of significant liquidity ease.

Bondholders’ meetings to be summoned

NAS has requested Nordic Trustee AS as Bond Trustee to summon bondholders’ meetings in the context of a request to amend certain terms and conditions of the outstanding bonds NAS07 (ISIN NO0010753437) and NAS08 (ISIN NO0010783459) maturing 11 December 2019 and 7 August 2020 respectively.

In addition to receiving asset backing, NAS proposes to amend the call structures to include step-ups of the call premiums, including redemption at maturity at 105% of par. The bondholders will be further compensated through an early bird fee and an amendment fee.