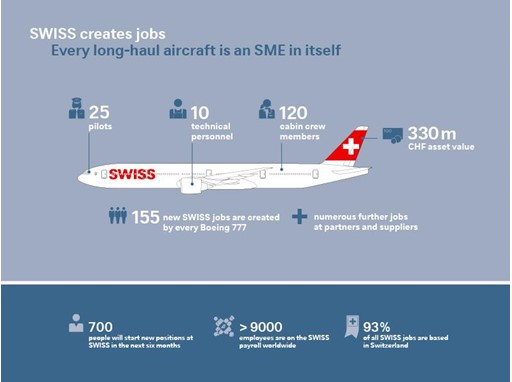 SWISS will continue to create jobs in 2019 and 2020, and will be recruiting some 700 new personnel between now and the end of next March. The two further Boeing 777-300ERs which are set to join the SWISS aircraft fleet in early 2020 alone will generate over 300 additional work positions – the equivalent of a small to medium-sized enterprise for each of the long-haul jets. Young people embarking on their work careers can also choose from a wide and growing range of SWISS apprenticeship opportunities.
In conducting the biggest fleet renewal in its history, Swiss International Air Lines (SWISS) is further underlining its commitment to Switzerland and its economy. Some CHF 8 billion are being invested in the SWISS fleet over a ten-year period. The bigger and more fuel-efficient new aircraft offer greater inflight comfort, are easier on the environment, reduce operating costs and create attractive new jobs, too.

The delivery and entry into service of the two further Boeing 777 aircraft in the first quarter of 2020 will create over 300 new jobs at SWISS in the cockpit, cabin and technical fields. “Each one of our long-haul aircraft is essentially a small to medium-sized enterprise,” explains SWISS CEO Thomas Klühr.
Over 500 new cabin crew members will be recruited between October 2019 and March 2020, around half of them in view of the addition of the two further long-haul aircraft. This will mark a new record in SWISS’s recruiting activities for any six-month period. A total of 230 new pilots will also join the company between 2019 and 2021 to meet the rising cockpit crewing needs. An average of 25 pilots are needed to operate each long-haul aircraft.
Thanks to its recently-launched pilot recruitment campaign, SWISS has already seen a tangible increase in applications from aspiring pilots in Switzerland and has been especially pleased to note a steep rise in applications from women interested in pursuing a pilot’s career. While SWISS is active all over the globe, some 93% of its personnel are recruited in Switzerland.

A major trainer and educator, too

SWISS has long been committed to Switzerland’s dual education system and supports and promotes the training of young people by offering apprenticeships for future polymechanics and automation engineers and – together with its educational partner login – for future public transport officers. The company has steadily increased the number of apprenticeships it provides over the past three years. Its workshop for its technical apprentices is also being substantially enlarged, to enable 30 apprentices a year to be trained from next summer onwards.
“Around 70 per cent of young people in Switzerland opt for a vocational apprenticeship,” says SWISS CEO Thomas Klühr. “Switzerland’s dual education system is admired all over the world, and it’s a key factor in the country’s economic performance. With our active involvement in vocational training, we at SWISS also make a major contribution both to securing our own employees of tomorrow and to the broader Swiss education system.”
SWISS has given countless further young people their entry into the working world through its internships and other practical training opportunities since its foundation in 2002. Many of them are still with the company today. SWISS also welcomed its 2,000th intern at the beginning of this month.

Air transport is a vital element in both the Swiss economy and Switzerland’s attractiveness as a place to work and do business. The Swiss Federal Council’s Report on Swiss Aviation Policy describes the country’s air transport sector as having an “outstanding importance” to  Switzerland’s locational appeal.
Through its extensive route network centred on its Zurich Airport hub, SWISS offers direct air connections with the world’s key economic markets and, in doing so, provides a foundation and a framework for the globalization of today. Swiss aviation is responsible for over 190,000 jobs – more than 9,000 of them at SWISS alone – and over CHF 33.5 billion of added value per year.
Full details of SWISS’s wide range of vocational and training opportunities will be found on the SWISS careers portal at www.swiss.com/careers.

Nature as a role model: Lufthansa Cargo to equip its Boeing 777 freighters with sharkskin technology from LHTechnik and BASF