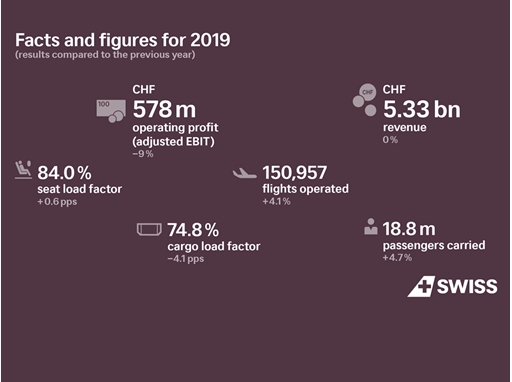 SWISS generated adjusted earnings before interest and taxes (Adjusted EBIT) of CHF 578 million for 2019 (prior year: CHF 636 million), and thus again achieved its target of a double-digit Adjusted EBIT margin. Total revenues for the year amounted to CHF 5.33 billion, broadly in line with the CHF 5.30 billion of 2018. In view of the drastic decline in bookings in the last few weeks as a result of increasing travel restrictions and border closures, SWISS is experiencing massive revenue losses in 2020. Short-term measures to safeguard the company’s liquidity are currently the top priority. No forecasts can yet be made on earnings results for 2020, in view of the present extremely unpredictable developments.

Swiss International Air Lines Ltd. (SWISS) delivered another strong business performance in 2019, despite challenging economic parameters. The Airline of Switzerland posted an Adjusted EBIT margin of just under 11 per cent, and thus again achieved its objective of a double-digit margin result.

A favourable operating result despite a toughening business environment
Adjusted earnings before interest and taxes (Adjusted EBIT) for 2019 amounted to CHF 578 million, 9 per cent below the record CHF 636 million of the previous year. Total revenues stood at CHF 5.33 billion, broadly in line with the CHF 5.30 billion of 2018. Earnings were reduced by higher fuel costs in particular. Maintenance costs were also up year-on-year as recently-acquired aircraft became subject to their first periodic maintenance checks. And SWISS further felt the effects of a decline in cargo demand in the face of a wider cooling of the global economy.

Adjusted EBIT for the fourth quarter of 2019 amounted to CHF 89 million, a 2-per-cent increase on the CHF 87 million of the prior year. The improvement is primarily attributable to continuous process standardizations throughout the Lufthansa Group and to non-recurring items. Total fourth-quarter revenues amounted to CHF 1.28 billion, unchanged from the prior-year period (2018: CHF 1.28 billion).

“Despite a worsening economic environment, we performed well in 2019, too,” says SWISS CEO Thomas Klühr. “And we achieved our target of a double-digit Adjusted EBIT margin.”

Massive revenue losses as a result of the coronavirus crisis
The draconian travel restrictions and border closures that have been imposed by numerous national authorities in response to the growing spread of the COVID-19 coronavirus are having a particularly damaging impact on the global air transport sector. SWISS has also had to reduce its production by more than 80 per cent in the past few weeks, and over two-thirds of the SWISS aircraft fleet have been taken out of service.

CEO Thomas Klühr explains: “We will continue to strive to maintain a minimum number of routes for as long as we can, to ensure that when the crisis does abate, we can resume our services to those countries which reopen as swiftly as possible. Demand will pick up again, but only gradually and with some delay.”

Should the present situation worsen even further and additional travel prohibitions be imposed, SWISS can no longer rule out suspending all its flight operations. “This is not a structural issue, though,” emphasises Thomas Klühr. “It would be a response to external developments that are affecting the entire airline industry and the whole world economy. SWISS is essentially a robust and healthy major Swiss company that holds a strong market position as part of the Lufthansa Group.”

Short-term liquidity the paramount priority
SWISS has already initiated a number of cost-saving measures (such as a hiring freeze, deferrals of the payment of salary components, a waiver by management of part of their salaries and the cessation of projects not essential to operations) to immediately safeguard the company’s liquidity.

Short-time working will also be introduced in the next few days. The corresponding requests have already been submitted for SWISS’s cockpit and cabin personnel and for its SWISS Technics and Swiss WorldCargo staff, and a further such request covering administrative areas will be submitted today. The adoption of short-time working has been agreed with the company’s staff associations.

“We must assume that all of Europe’s airlines will need state support,” Thomas Klühr continues. “It’s no longer a question of whether: it’s a question of when. And even though, together with the Lufthansa Group, SWISS can ‘hold its breath’ longer than some other European carriers, we will also face a temporary liquidity shortage if the crisis persists over the longer term. In such an event, it would be vitally important to secure such liquidity again and be given prompt assurances of further supporting actions such as state guarantees or bridging loans that could be repaid once the crisis is over.”

As The Airline of Switzerland, SWISS will continue to do its utmost to maintain its home country’s air connections with the world, despite this extraordinary situation and its ever-toughening conditions.

No forecasts can currently be made on earnings results for 2020, in view of the present extremely unpredictable developments.

Airbus delivers to Delta Air Lines its first U.S.-assembled A220 from Mobile, Alabama