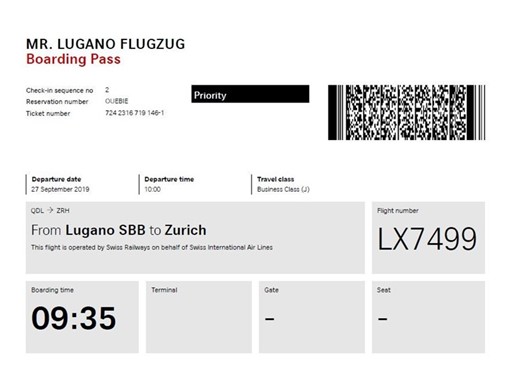 A new ‘Flugzug’ rail service between Lugano Station and Zurich Airport is bookable now for travel from 16 October. The cost of the rail journey is included in the SWISS flight ticket.

Swiss International Air Lines (SWISS) and Swiss Federal Railways (SBB) now offer customers a ‘Flugzug’ rail service between Lugano Station and Zurich Airport for travel on or after 16 October. Selected SBB rail connections between Lugano and Zurich Airport will be issued with a SWISS flight number, and the cost of the rail journey is included in the SWISS flight ticket price.

The ‘Flugzug’ timetable offers 14 daily services in each direction between Lugano Station and Zurich Airport. The new rail service thus provides travellers between the two points with even more flexibility than the present four daily flights. The rail services concerned also cover all the relevant SWISS connecting flights from and to its Zurich hub. The new ‘Flugzug’ services are bookable now for travel on or after 16 October, on the SWISS website or at any travel agency.

SWISS is keen to ensure that the Ticino region is well connected with its Zurich Airport air travel hub. The present arrangement is an interim solution, and SWISS and SBB are working closely on optimising the ‘Flugzug’ rail service which as an SBB feeder rail service until now only existed between Basel and Zurich Airport.

The air connection between Lugano and Zurich was operated by Adria Airways on behalf of SWISS. After the bankruptcy of the Slovenian carrier, there was no longer an air link between the two cities. The new rail link will fill the void.