Good news for Canada fans: From 1 June 2020, Lufthansa, in cooperation with Eurowings, will reintroduce the Canadian city of Calgary to the flight schedule from Frankfurt on a seasonal basis.  Lufthansa is thus further expanding its long-haul tourist offer from Frankfurt. Calgary, located in the southwest of Canada, is a popular tourist destination and an ideal starting point for exploring the province of Alberta and the well-known Banff and Jasper National Parks in the Rocky Mountains.

From Germany’s largest hub, it will initially depart for North America four times a week – on Mondays, Wednesdays, Fridays and Saturdays. The flight with the flight number LH5452 departs Frankfurt at 09.50 and arrives at its destination at 11.55 local time. The return flight of LH5453 departs Calgary at 13.45 and arrives in Frankfurt at 07.20 the next day. An Airbus A330-200 with a total of 270 seats on board will be used for the flight. The booking classes available are Business Class, Premium Economy Class and Economy Class.

In addition, the Lufthansa Group offers numerous other options for flying to Canada with its airlines Austrian Airlines, Brussels Airlines, Edelweiss and Swiss International Air Lines and its joint venture partner Air Canada. 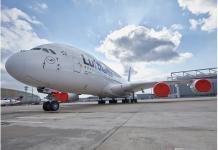