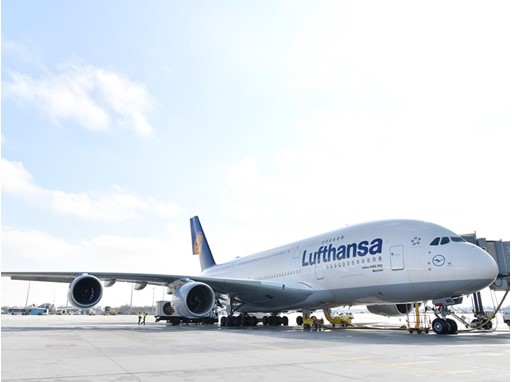 The destination for the premiere could hardly be more spectacular. This coming Sunday, a Lufthansa Airbus A380 will for the first time take off from Munich on a regular passenger flight. Its destination will be the City of Angels, “Los Angeles”. Flight LH 452 will be taking off for California at 12.00 pm, probably from the northern take-off and landing runway. Lufthansa chief pilot Raimund Müller will welcome nearly 509 passengers on board the “Munich”, as the A380 has been named – that’s how many seats the largest passenger aircraft in the world has. Among other things, 890 main courses, 530 cushions and 41 litres of tomato juice will also be loaded onto the aircraft for the passengers.

Not long afterwards, in the early evening, the second A380 flight will follow on: LH 722 will take off at 7.15 pm, heading for Peking, and at 10.25 pm, the third A380 will take off for Hong Kong, bearing flight number LH 730. All A380 flight connections will be offered daily from Munich.

The Airbus A380 has been Lufthansa’s flagship aircraft since 2010. Currently, the fleet comprises 14 aircraft, five of which are to be stationed in Munich as of March 25. When it comes to being environmentally friendly, the A380 stands out from the crowd with a specific fuel consumption of around three litres per passenger per 100 kilometres and a quiet Trent 900 engine made by Rolls Royce which has a very low level of noise emission.