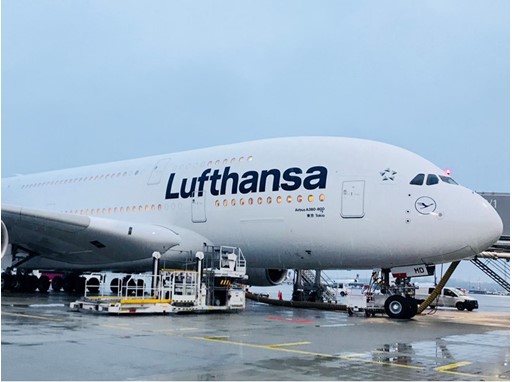 Lufthansa Flagship in the new design: on Wednesday, 12 December, the Airbus A380 landed in Germany for the first time in the new Lufthansa Design. The landing of the newly painted flagship of the Lufthansa fleet marks the festive end of the anniversary year of the crane’s 100th birthday. The Airbus, named “Tokyo”, was welcomed to Munich Airport early Wednesday morning. The aircraft came from Guangzhou, China, where it has been repainted over the past three and a half weeks. The A380 is scheduled to take off for its first commercial flight to Miami at noon today. “We are delighted to be the first to present the Lufthansa flagship in its new premium design to our Munich customers. The A380 offers a unique travel experience and maximum comfort in four classes. It is a perfect match for our 10-star premium hub in Munich,” says Wilken Bormann, CEO Lufthansa Hub Munich.

The Airbus with the identification code D-AIMD is based at the Lufthansa Hub in Munich. The aircraft is one of a total of five Airbus A380s based in the Bavarian capital for the first time this year. The A380 is also one of the first thirty Lufthansa aircraft to fly in the new design this year. On the occasion of the 100th anniversary of the Lufthansa crane, the airline has further developed its design and adapted it to the requirements of a digitized world. The redesign of the airline’s brand identity is the most visible sign of Lufthansa’s far-reaching modernization.

As part of the airline’s new design, the new Lufthansa paintwork underlines Lufthansa’s modern premium claim. The fuselage, wings and engines of the A380 are all painted in brilliant white. The precise white line at the apex of the vertical tail supports the streamlined shape of the aircraft. The deep blue, optically elongated tail provides the basis for a large, strong and contrasting representation of the crane. The Airbus A380 is an aircraft of superlatives: the crane, which has been given an even more dynamic design as part of the design refresh, has a diameter of over six meters on the tail unit. The letters of the Lufthansa lettering on the aircraft reach a maximum height of 1.90 meters. More than 4,200 square meters of aircraft skin were repainted with hundreds of litres of paint.

Since the introduction of the new brand design until the end of the year, 30 aircraft have been painted in the new design, over 50 gates have been redesigned at the Lufthansa hubs in Frankfurt and Munich and more than 200 in-flight service items have been exchanged. By the end of 2019, over 50 percent of the work on the Lufthansa hubs in Frankfurt and Munich will have been completed and over a quarter of the fleet will be flying in the new design. Digital media is already appearing in a completely new design. In 2021, 80 percent of the new brand design will be visible along the entire travel chain. The last aircraft repainting is scheduled for 2025.

This year Lufthansa celebrated the 100th anniversary of its corporate symbol. In 1918, the graphic artist and architect Otto Firle designed a stylized bird for the “Deutsche Luft-Reederei”, a predecessor of “Luft Hansa”. Over the past 100 years, the crane has become an unmistakable company logo and the symbol of the Lufthansa brand. Today it stands for competence, cosmopolitanism and quality, inspiring trust and sympathy around the globe.