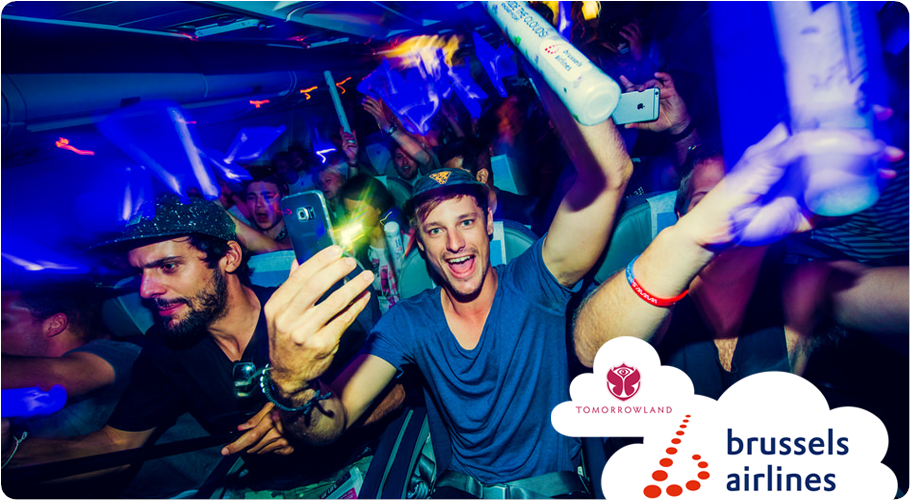 This year, Brussels Airlines brings 10.207 festival goers to Belgium to celebrate at Tomorrowland in Boom. All these music lovers come to Belgium on 236 different flights from 79 cities all over the world. The most popular departure cities are Geneva, Madrid and Barcelona. About 500 Tomorrowland goers chose a Discover Europe Package, in which they can combine the festival with a visit to several European cities.Before getting on the plane, festival goers will be treated to a pre-party at the gate at 24 departure airports. 47 flights take the party up in the air with music on board, of which 8 flights even host a live DJ-set at 30.000 feet. The party flights can be followed online here.This year, Brussels Airlines proudly organizes party flights with Amare, the fourth Airbus A320 in the  airline’s Belgian Icon series, dedicated to Tomorrowland.  Amare was chosen as the fourth special livery plane because Tomorrowland really has become one of Belgium’s icons, the festival being famous around the globe. Guests on board of Amare will be in the Tomorrowland mood right from their departure, with its special mood lighting and music installation on board.  Tonight, DJ Yves V will play a live DJ set on board when Amare flies 180 party goers from Ibiza to Brussels Airport. Michelin star chef Roger Van Damme serves a special Tomorrowland dessert for everyone on board.

New this year is that Brussels Airlines, in cooperation with Brussels Airport, will test a baggage drop off point at the Dreamville camping, so Tomorrowland goers don’t have to carry their bags and tents to the airport themselves and can have a relaxed trip home or can enjoy a nice day of sightseeing before heading to the airport.

Tomorrowland will welcome 200.000 festivalgoers per weekend. The global interest for the ticket sale was overwhelming once again. People from all over the world will visit the festival and make Tomorrowland the most international event on the planet. Together, Brussels Airlines and Tomorrowland unite the world in Belgium every year. In an effort to bring people from different nationalities together, Brussels Airlines is challenging all foreign Tomorrowland goers to take a photo with a Belgian and to share it on Instagram with the hashtag #brusselsairlinesunitestheworld. More information about the contest here.

At the festival site, Brussels Airlines brings everyone with their heads in the clouds, with The Loop, a giant ferris wheel that offers the best view over the magnificent landscape of Tomorrowland and far beyond.  A ride on The Loop (previously called the Cloudrider) is, like every year, free for every Tomorrowland visitor.

Luchtzak.be will be present on one of the Tomorrowland flights (SN1808 on 20 July) and report about  the mood on board  of the A330-300 and at the pre-flight party at the gate in Frankfurt !