LOT increases frequencies of flights to China to 7 times a week. From the end of October, the Polish flag carrier will fly from Warsaw to Beijing-Daxing International Airport (PKX) 4 times a week, while maintaining the current service of 3 weekly flights from Warsaw to Beijing Capital Airport (PEK). The connections to the Chinese capital will be operated by modern wide-body aircraft B787-8 and B787-9

The flights between Warsaw Chopin Airport and the biggest and most modern airport in China – Beijing-Daxing will be operated from 28 October four times a week according to the following timetable:

LOT will also operate the current frequency of three flights per week to Beijing Capital Airport (PEK) according to the timetable:

– We have pursued a higher frequency of flights to China for a few years because we see great business potential in this connection. This new infrastructure investment – Beijing-Daxing International Airport – opens new development opportunities for us on one of the biggest and most dynamically growing markets in the world. Thus, as from the end of October, we will increase the number of flights operated between Warsaw and Beijing from three to seven a week. This is not only a great offer for passengers who travel between China and Poland for leisure and on business but also for passengers who start their travel from many Central and Eastern European as well as Western European cities – says Rafa? Milczarski, CEO of LOT Polish Airlines.

The timetable of flights to Beijing-Daxing Airport has been adjusted to ensure convenient transfers via Warsaw Chopin Airport starting from 1 hour from numerous European cities including Sweden, Copenhagen, Hamburg, Berlin, London, Paris, Brussels, Frankfurt, Prague, Vienna, Budapest, Bucharest or Vilnius. The flight to Beijing-Daxing from Warsaw will last 8 hours and 40 minutes.

LOT launched direct flights from Warsaw to Beijing in 2012. This connection can be developed now due to awarding the carrier with the so-called slots i.e. times of take-offs and landings at the new Beijing-Daxing airport.

The aviation market between Poland and China is growing fast: in 2018, the total number of passengers travelling between Warsaw and Beijing was over 70,000. In the last few years, there was also a significant increase in the number of Chinese tourists visiting Poland – from 16,000 in 2007 to nearly 140,000 last year. In 2018, the average passenger load factor in LOT’s aeroplanes on Warsaw-Beijing (PEK) flights amounted to 90 percent in the summer season and 75 percent in the winter.

The new connection to Beijing-Daxing also means the growing potential of carriage of goods for LOT Cargo. Besides the standard transport of goods on this route covering car parts, mail, medical supplies, garments and chemical products, after obtaining the IATA CEIV Pharma Certificate in the autumn, LOT Cargo will take up the transport of temperature-sensitive pharmaceutical products, such as medicines between China and Europe.

The launch of the connection from Warsaw to Beijing-Daxing has been planned as part of the profitable growth strategy implemented by LOT since early 2016, and the Polish flag carrier has fulfilled most of its assumptions ahead of time. LOT is continuously developing its fleet. By the end of 2019, the fleet will be extended by another B787 Dreamliner, making a total of 15.

Last year, LOT carried a record number of over 8.9 million passengers, i.e. 2 million more in comparison to the preceding year. This year, it plans to exceed the barrier of 10 million passengers. LOT uses more than 80 modern aircraft daily. The carrier offers 111 scheduled flights on three continents.

Tickets for LOT’s new flights to Beijing-Daxing are available on all channels, including the lot.com website, LOT Call Centre, LOT Travel offices and travel agents. 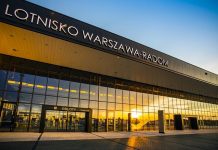