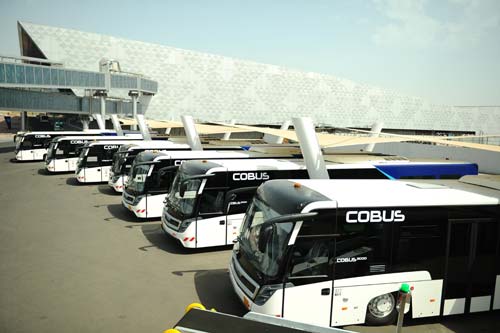 In accordance with Kuwait Airways development plans to provide extensive services, KAC has recently received different new equipment and shuttle buses to transfer passengers of First class, Business and Economy class, in addition to conveyor belts for transporting luggage in and out of the aircraft as well as aircraft stairways.

Kuwait Airways Chairman, Mr. Yousef Al- Jassem and the Deputy Director General for Aviation Safety & Air Transport Affairs, Engineer Emad Faleh Al- Juluwi, together with other officials conducted an inspection tour at Terminal 4, to examine the arrival of the new equipment which is considered as part of Kuwait Airways strategic development plans to constantly deliver the most advanced services for its customers.
During the inspection tour, KAC Chairman, Mr. Yousef Al- Jassem emphasized that receiving the new equipment, will undoubtedly contribute to providing excellent services. Al- Jassem also acknowledged the efforts contributed by the officials of both Ground Handling Department and Operations Department in accelerating the delivery process of the equipment.

Moreover, the equipment is secured and guarantees the safety of distinguished passengers. Al-Jassem also emphasized that the equipment is part of the Ground Handling preparations of Terminal 4 which supports Kuwait Airway’s policy in providing convenient travel procedures.

Al-Jassem also stated that Kuwait Airways is progressing to complete the entire ground handling equipment, along with developing and upgrading its facilities in accordance with KAC’s vision and strategic plans established by the Board of Directors and the Executive Management to achieve the desired objectives to promote the national carrier towards greater advancement levels amongst the fierce competition in the local and regional aviation industry.