Japanese start-up ZIPAIR has filed an application with the US Department of Transportation (DOT) to launch nonstop flights to the US later this year.
ZIPAIR, a subsidiary of Japan Airlines, will launch with a fleet of two Boeing 787-8s.

The airline has indefinitely postponed its first flight, between Tokyo and Bangkok (BKK), that was planned for May 2020. Zipair maintains plans to begin Seoul Incheon (ICN) service on July 1.

About the Name
‘ZIPAIR Tokyo’ is a coined word derived from the English word ZIP, which describes speed, such as how fast time can pass when travelling on a unique airline. In addition, the brand name incorporates the idea of travelling to destinations in various ZIP CODES, while aiming to create a calculated travel experience that encompasses the originality and ingenuity of the Japanese culture. And finally, the word Tokyo was added to the name, as the airline will be based in one of the most advanced cities in the world. 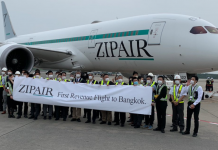