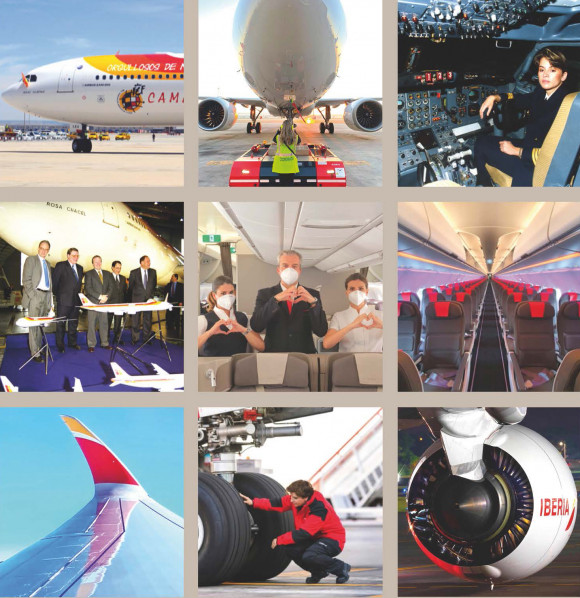 On 18 March 1981 Iberia Captain Joaquin Reixa landed an Airbus A300 in Madrid. The aircraft, christened “Doñana”, was Iberia’s first Airbus, and it began a story that has lasted 40 years.

Because of their large capacity for both passengers and freight, the Spanish airline’s first Airbus A300s were used chiefly on routes to the Canary Islands.

They were followed by the Airbus A320s

which were used for short- and medium-haul flights in the 1990s. The decade also saw the entry into service of long-haul Airbus A340/300s and of the A340/600s, which joined the Iberia fleet starting in 1996.

The arrival of the Airbus A330 in 2013 coincided with Iberia’s great transformation. New Business and Economy cabins and the uses of twin-engined craft on long-haul flights brought

a great leap forward in efficiency.

The incorporation of the technologically advanced Airbus A350s and A320neos represented another major stride for Iberia. The new aircraft were quieter, cleaner, and more comfortable for passengers.

Since 2009 Iberia’s fleet has been composed entirely of Airbus models, which gives the airline greater flexibility in the scheduling of both flights and crews, while bringing significant cost savings in crew training and in operating costs, including maintenance.

Iberia is committed to reaching a zero net emissions target by 2050, and has begun the process with the incorporation of more efficient aircraft such as the Airbus A320neo and A350, used on short/medium and long-haul flights, respectively, and which are between 15% and 25% more fuel-efficient than earlier aircraft of similar capacity.

The use of more efficient aircraft along with other measures to reduce fuel consumption and exhaust emissions helped Iberia achieve a 15% reduction of emissions per passenger between 2010 and 2019. It aims to bring this down by another 5% by 2025.

The pandemic hastened the retiring of Iberia’s Airbus A340/600s, which left the fleet in August 2020. Today nearly 50 of the Spanish airline’s flights are made in the efficient Airbus A320neos and A350s.

The 40-year relationship between Iberia and Airbus has also contributed to the development of the Spanish aviation industry, since the two companies have also cooperated in such businesses as aircraft maintenance, and are now working together, with EU funding, to drive the post-pandemic recovery of the aviation business in Spain.

According to Spain’s Association of Defence, Security, and Aerospace Technology (TEDAE), in 2019 the aviation industry accounted for 45,000 skilled jobs and for sales amounting to 10,523 million euros, or 6% of Spain’s total GDP. Of these sales, civilian aviation accounted for 54% and military for 46%. The fact that 76% of sales were exports attests to the great competitiveness of Spain’s aviation industry.