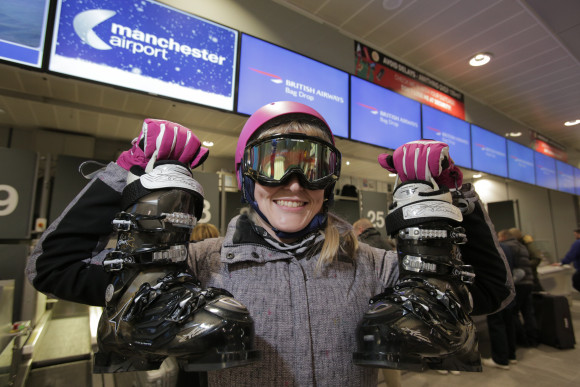 As  Manchester basks in a light dusting of snow the serious skiers took off for the deeper slopes on the new British Airways flights to Salzburg and Chambery this weekend.

The two new winter-only flights from Manchester will operate every Saturday through to April to Salzburg in Austria and Chambery in France, gateways to some of Europe’s top ski resorts.

To celebrate the launch, Helen Jones, British Airways’ marketing manager, donned her ski gear to wave customers off as they checked-in for the inaugural flights.

Basic each way fares to both cities from £49 are available to book on www.ba.com

In May the airline launched seven new summer-only routes from Manchester to popular leisure destinations in Europe as well as London City, providing more than 35,000 extra seats from the North West. Next May new services to Florence and Dublin from Manchester will start.

Luke Hayhoe, British Airways’ general manager customer and commercial, said: “We are delighted to follow our successful summer programme from Manchester with these new direct services to two of the most popular snow destinations in Austria and France. They are also brilliant winter break destinations even for those who don’t ski!”

All flights will operate on modern Embraer 190 jet aircraft, with spacious cabins and two abreast seating so every customer can have an aisle or window seat.