SURF’S UP: DIRECT TO DURBAN 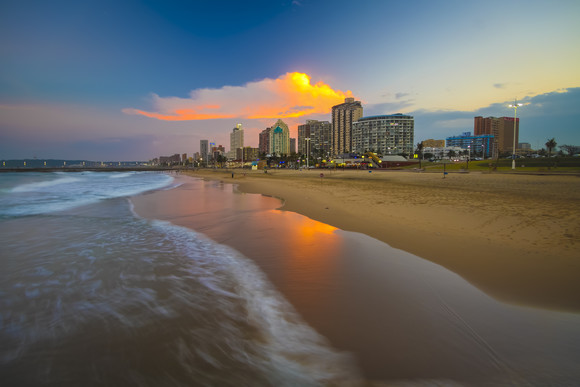 Travellers hoping to escape the Northern Hemisphere’s shorter days and long, cold nights this winter have a new destination: the South African city of Durban with the start of British Airways’ new direct service.

From October 29 holidaymakers will be able to surf their heart out along the Golden Mile, explore the lush green garden province and enjoy the golden sun-kissed beaches with three direct flights a week from Heathrow to the spectacular South African city.

The service will be the only non-stop link between Europe and Durban and flights will be operated by the airline’s newest fleet of aircraft, the Boeing 787-8. The timetable will have a morning arrival in Durban and an evening arrival into Heathrow. The new route comes as British Airways rolls out a £4.5 billion, five-year customer investment plan, with a focus on excellence in the premium cabins and more choice and quality for all its customers.
Durban is a year-round destination, with sultry summers and mild, dry winters. It has long been a favourite holiday playground for South Africans but will soon be easier than ever for international visitors to enjoy too.

Alex Cruz, British Airways’ Chairman and CEO, said: “Durban’s warm water, hot summers and laid-back beachy atmosphere make this coastal city the perfect holiday destination. It is a gateway to many nature reserves, parks and historic sites, and has a thriving food, drink and art scene; defining the city as a must-visit for culture and adventure.

“Durban is also home to the busiest port in South Africa and is a large manufacturing hub, so the new route will secure another important link between the UK and the region that will be a welcome addition for business travellers.”

Sihle Zikalala, Minister for the Department of Economic Development, Tourism and Environmental Affairs, said: “We are proud to be able to showcase the city of Durban to the world through this new British Airways direct flight, the sheer diversity in travel and business opportunities that visitors can access through this gateway into the province of KwaZulu-Natal will unlock enormous potential.

“Great Britain and KwaZulu-Natal share a very rich history, and we are excited to be able to rekindle that relationship with the launch of this new route. The investment and trade opportunities presented by this direct flight between Durban and London will undoubtedly add value to our economy.”

British Airways also operates a twice-daily service from Heathrow Terminal 5 to Johannesburg and flies year-round to Cape Town every day from Terminal 3 and three times a week from Gatwick during the winter season.

British Airways has a long-standing partnership with Comair who fly direct from Johannesburg and Cape Town to Durban and six other destinations across South Africa, Sub-Saharan Africa and the Indian Ocean Islands.

How British Airways treats its loyal workforce is a national disgrace, MPs say

From Verona to Berlin and Düsseldorf: Air Dolomiti’s new routes and German destinations

Air traffic in Europe on the rise again