Following the recent reopening of US borders for Brits, British Airways’ first transatlantic flight from Gatwick took off today bound for Tampa, Florida.

The airline’s services to Tampa will operate three times a week. British Airways will also resume flights from Gatwick to popular family holiday-hotspot Orlando on Friday 19 November. This is the first time the airline has operated to these destinations, and to the US from Gatwick, since the start of the Covid-19 pandemic in March 2020.

British Airways is planning on operating to 23 US airports this winter, more than any other transatlantic carrier, with 246 flights a week from January. As well as Tampa and Orlando from Gatwick, flights to much-loved cities Nashville and New Orleans will restart in December from Heathrow.

The airline’s A380s will also touch down in the US once again, with the jumbo jet due to start operating to Miami from Heathrow from December 5, Los Angeles from December 9 and Dallas from March 27.

Claire Bentley, Managing Director of British Airways Holidays, said “Orlando and Tampa are among our most popular destinations, so we know how much our customers are looking forward to heading back. Florida is such a diverse state, so whether it’s a relaxing beach holiday, a theme park adventure or an epic road trip, there’s something for every type of traveller. In addition, we’re offering a wide range of British Airways Holidays deals to suit every budget.”

British Airways’ first flight to the US when restrictions were lifted on November 8 was the airline’s BA001 service to JFK airport, customers received a New York-style welcome as they touched down in the Big Apple to reunite with friends and family after more than 600 days of closed borders. The airline is currently operating seven flights a day to New York, increasing to eight from mid-December. 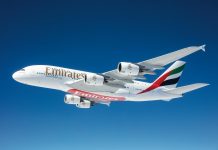